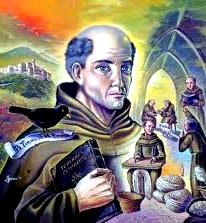 Thomas was the son of a butcher of Florence, named Bellaci. His parents raised him in the fear of God; but when he had grown to young manhood, he strayed from the path of virtue by associating with bad companions. Matters came to a point where parents warned their sons to have nothing to do with Thomas Bellaci, and it was a disgrace to be found in his company. Then a rich man in town, who was also very wicked, made Thomas his friend and used the daring young man for many a villainous act. There came a day when a grievous crime was committed in Florence, and Thomas was accused of it. Although this time he was really guiltless, his reputation put him in danger of being condemned to severe punishment.

In his extremity he appealed to his patron, only to learn the worthlessness of such friendship. Thomas was not even received at the home of his patron. Calling again, he was told in plain words that so disreputable a person as he should never again venture to approach.

Crushed at the turn of events, Thomas paced the streets until he met a pious priest who had succeeded in bringing more than one such young man to his senses. Thomas at first rebuffed the priest, but when the priest continued to show him much sympathy, Thomas opened up his heart and told his story. The priest consoled him, and invited him to his home, saying that he would do everything in his power for him. Actually he had Tomas declared innocent of the crime imputed to him.

Thomas now resolved to make amends for his disorderly life under the direction of his rescuer. He broke off his former associations and joined a pious society of which the priest was director. Instead of wandering about the streets and taverns, he was now seen busy at his work and visiting churches; instead of indulging in games and riotous pleasures, he now devoted himself to prayer and works of penance. The more Blessed Thomas of Florence was filled with the grace of God, the more he longed to leave the world and to give himself to a life of penance.

Near Fiesole, the Friars Minor had recently built a convent that was renowned for the saintly lives of its members. There Thomas asked to be admitted as a lay brother. His request was considered carefully and then granted. The penance Thomas did in the convent proved the sincerity of his conversion. By fasting, keeping vigils, and scourging himself, he became a model friar. His clothing consisted of the cast-off clothes of his brethren. He performed the humblest tasks with the most perfect obedience.

The sincere conversion of Brother Thomas was rewarded by God with extraordinary graces. At prayer Blessed Thomas of Florence was frequently rapt in ecstasy, so that his body was often seen raised on high. He was favored with remarkable spiritual gifts so that, although he was a lay brother, he was appointed master of novices. He trained many holy men who in time became glories of the order.

In the course of time Pope Martin V entrusted Thomas with the task of preaching against the heretical Fraticelli, whose complete extinction is attributed to him and his fellow Friars Minor. Thomas also founded many convents in southern Italy and elsewhere. Pope Eugene IV finally sent him with other Franciscans to the Orient to promote the reunion of the Eastern with the Western Church. There Blessed Thomas of Florence encountered great hardships, hunger, and cruel imprisonment; and he had hopes of winning the martyr’s crown. However, he was released when the pope sent a large sum of money on his ransom.

Returning to Italy, Thomas intended to make the request to be sent back to the Orient. But Blessed Thomas of Florence died on the journey to Rome, in the convent of Rieti, on October 31, 1447. Because of the many miracles which were wrought through his intercession, his veneration increased steadily; and Pope Clement XIV beatified him.