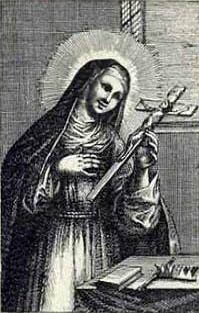 Seraphina, who belonged to the family of the counts of Urbino, became an orphan at an early age. Her maternal uncle, Prince Colonna, undertook to raise the child. During her stay in Rome, the girl’s noble disposition unfolded itself like a flower. God and virtue had the strongest attraction for her, and the vanity of the world had no value in her sight.

Scarcely had she arrived at young womanhood when, at the wish of her relatives, she was betrothed to the widowed Prince Alexander Sforza, governor of Pesaro. A difficult task awaited the young wife, but she proved equal to it. The prince had two children by his first marriage, a son and a daughter. Seraphina embraced them with as much affection as if they had been her own children, and they in turn loved and esteemed their step-mother as their own mother. She also completely won the affection of her husband. After a few years the prince was obliged to take up arms to assist his brother, the duke of Milan. He believed that he could entrust the government to no one better than to his young wife, for he marveled at her wisdom and skill in the management of the household.

The prince’s absence extended over a period of six years. Seraphina carried out her task so perfectly that everyone admired her wise foresight and impartiality. She was loved and honored by all for her brilliant virtues and extraordinary generosity. She sought and obtained God’s blessing on her undertakings by abundant almsgiving.

When her husband returned, it was to be expected that Blessed Seraphina Sforza would receive due credit for her success. But God sometimes permits His servants to be treated in a very different way. A woeful change had taken place in the prince. He had abandoned himself to a dissolute life; and he had become so reckless as to bring a paramour into his home and reduce Seraphina to the condition of a servant. But she held her peace, suffered, and prayed. The very presence of his lawful wife, however, was an unbearable reproach to the profligate; he aimed to take her life. When his attempts failed, he forcibly ejected her from the palace, ordering her to hide herself in the monastery of the Poor Clares; and that is where Seraphina went.

Although happy to serve God in the midst of the spouses of Christ, Seraphina nevertheless continued to wear secular garb so as to make it easier for the prince to return to his duties. She prayed unceasingly for his conversion. The prince tried to force her to take the religious habit; but only when she was assured that it was God’s will, did she receive the habit and take the vows. She was a perfect religious, faithful even in the most trifling ordinances.

Her perfect sacrifice brought about her husband’s conversion. At last he realized what he had done. He came to the convent, and on his knees begged his holy wife for forgiveness. For nine years he lived on, striving to the best of his ability to make amends for his sins and for the scandal he had given. Blessed Seraphina Sforza lived eighteen years more in the convent, and promoted its temporal and spiritual welfare, especially during the last three years when she was abbess.

On the feast of the Nativity of the Blessed Virgin, September 8, 1478, Blessed Seraphina Sforza went to receive her heavenly crown. Pope Benedict XIV approved the perpetual veneration paid to her. Her body rests in the cathedral of Pesaro.