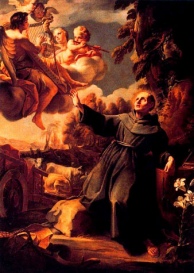 Blessed Sebastian of Aparicio was born of poor peasants in the year 1502, at Gudena in the Spanish province of Galicia. In his youth he attended his father’s sheep. When he was twelve years old, he was seized with a pestilential disease. His anxious mother carried him to a little hut far out in the field, so that no one else would be infected by him. While he lay there one day quite helpless and alone, a wolf from the neighboring woods approached by the providence of God, and bit open the plague spot with the result that Sebastian recovered completely.

When he arrived at young manhood, Blessed Sebastian of Aparicio left home to look for work among stangers in order to support his poor parents and his brothers and sisters. Because he was comely in appearance, wicked women frequently set snares for his purity. In order to escape them, he resolved, at thirty-one years of age, to sail for America which had been discovered recently. On the voyage he had to endure much ridicule from the sailors and his fellow passengers because of his piety and reserve.

Arriving safely at Pueble, Mexico, he at once resumed work in the fields. Also, he made plows and wagons, which were until then unknown to the half-civilized inhabitants, and taught them how to use them. With his team he plowed the fields of as many of the people as possible, never asking any compensation. He also built roads through the forests and mountains to the cities and seaports, making it easier to transport the produce. The main highway that to this day connects the mountain city of Zacatecas with the capital of Mexico was his work.

Blessed Sebastian of Aparicio undertook, in a carrier of his own, to transport grain and other wares, thus acquiring great wealth. He used the money for worthy purposes, while he himself lived like a poor man. In this way he won the esteem and the love of the natives as well as of the Spaniards. He married twice, each time choosing a poor but devout young woman; and with their consent he lived with them in virginal purity.

When death robbed him of his second wife, he gave all his possessions to the poor and to a convent of Poor Clares which he had established in Mexico City. Then, in the year 1573, when he was already seventy-one years old, he asked for admission among the lay brothers in the Order of St Francis. It was only after frequent and urgent requests that his petition was finally granted. In the novitiate he would not exempt himself from any of the hardships or works of penance, though he was an old man; he outdid even the most zealous of the young brothers.

After Blessed Sebastian of Aparicio had made his solemn vows, he was appointed to the task of collecting alms for the convent. He performed this trying task for the remainder of his mortal life to the great edification of the brethren and the faithful. Despite the many distractions that his work afforded, he was able to keep recollected in God, and his encouragement and example were instrumental in gaining many infidels and sinners for God.

He added certain rigorous penances to his daily labors, and God, who does not let Himself be outdone in generosity, granted him extraordinary graces. Sebastian could read the innermost secrets of hearts and could foretell future events. The wildest animals willingly obeyed him; and frequently, when he was in special need, angels brought him assistance in remarkable ways, at times bringing him food, another time protecting him from falling down a precipice, at other times again directing him on the right road.

In his ninety eighth year Sebastian died in the convent at Pudbla on February 25, 1600. When his body lay in state, the crowds that gathered were so great, and the miracles wrought were so numerous, that he could not be buried for a long time. More than three hundred miracles which he worked in his lifetime were cited at the process for beatification. Pope Pius VI beatified him in 1787; and efforts are being made in Mexico to have his cause of canonization introduced.