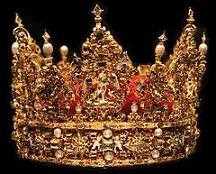 
Our Divine Lord says: "By their fruits you shall known them" and in these words He bestows great praise on Queen Blanche, for St Louis IX of France was her son, and his holiness was in great measure the result of her maternal rearing.

Blessed Queen Blanche, the daughter of the king of Castile, Spain, lived in happy wedlock with Louis VIII, King of France, for twenty-six years. She enjoyed the confidence of her husband so perfectly that when he died he entrusted her with the guardianship of their twelve-year-old son Louis and, until his maturity, with the government of the country. There were among the great ones in the land such who were envious og the widow and foreigner, and would have liked to take over the government. But Blanche administered the high and burdensome office with such impartial justice and great wisdom that the envious were silenced and her executive ability was highly commended by all.

As a mother she evinced genuine Christian sentiments. It is in the love for her children that a Christian mother must generally stand the test. Weill she allow them to do things that are displeasing to God? Will she love them more than God? "He who loves son or daughter more than Me, is not worthy of Me." Blanche proved that she was a true Christian mother, for she often said to her son: "Rather would I see you dead at my feet than stained with a mortal sin."

Blessed Queen Blanche was not satisfied, however, with helping her son to avoid mortal sin, she was anxious also to preserve him from venial sin. Mother and son therefore had themselves enrolled in the Third Order of St Francis. In living up to the rule she encouraged him to practice every virtue and to strive after Christian perfection.

The saintly son had such confidence in his mother that, having personally governed the country for several years, he again placed her in charge, while he went to the Holy Land with his army. He did not return until he received the news of her death in 1253. Blance died surrounded by devout sisters of the Cistercian Order, whose convent at Maubisson she had built. Clothered in the habit of the Third Order, she was buried in their church. The title of Blessed which was conferred on her in popular devotion may still be used, but is has not yet been officially confimed by the Holy See.

*from The Franciscan Book of Saints, Fr. Habig, OFM.