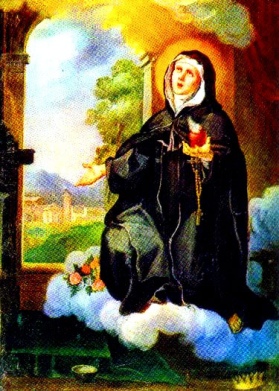 Blessed Philippa Mareri, who belonged to the illustrious family of the Mareri, saw the light of day at the castle of her parents near Rieti in Italy, toward the close of the twelfth century. At a very early age she was the favorite of all who knew her, not only because of her natural gifts, but principally because of her steady advancement in perfection. As a young woman she lived quietly at home, devoted to prayer and the cultivation of her high mental endowments. She took particular pleasure in reading the Holy Scriptures and studying the Latin language, in which she became very proficient.

About this time, St Francis often visited the valley of Rieti, where he established several convents and sometimes called at the home of the devout Mareri. His forceful admonitions, filled with holy simplicity and unction, and his severe life of penance made a deep impression on Philippa.

It was not long before Blessed Philippa Mareri resolved to imitate our holy Father, foregoing wealth and consecrating herself entirely to God. She rejected a proposal to marry with the words:

“I already have a spouse, the noblest and the greatest, Our Lord Jesus Christ.”

Neither the remonstrances of her parents, nor the ridicule of her brother Thomas, had any effect in changing her mind. She cut off her hair, donned a very coarse garment, and with several companions withdrew to a cave in the rocks of a nearby mountain.

Her austere life of penance and intimate union with God changed the resentment and mockery of her family into admiration. Thomas visited the mountain recess to ask Philippa’s forgiveness, and placed at her disposal the church of St Peter and an adjacent convent once occupied by the Benedictines, over which he was the patron. Full of joy the young community took up its abode there, accepting the place as a gift from heaven. They lived according to the rule of St Clare under the direction of Blessed Roger of Todi, to whom St Francis had entrusted the care of their souls.

The new foundation flourished remarkably, and many of the noblest young women joined their ranks. Philippa’s excellent example and loving manner were particularly instrumental in bringing about these results. Although she filled the capacity of superior, she was the humblest member of the community. She had no equal in zeal for prayer and mortification, and, like St Francis and Blessed Roger, she held poverty in the highest esteem. Blessed Philippa Mareri exhorted her sisters to have no care for the morrow, and more than once in times of need her trust in God was signally rewarded with miraculous assistance.

Blessed Philippa Mareri had lived and labored and made sacrifices for God for many a year, when it was revealed to her that the time of her dissolution was at hand. She was seized with a fatal illness. Gathering her sisters around her deathbed, she bade them farewell and exhorted them to persevere in their efforts toward perfection, and to remain united in sisterly love. Having received the last sacraments at the hands of Blessed Roger, she addressed to her sisters the words of the Apostle:

“The peace of God which surpasses all understanding keep your hearts and minds in Christ Jesus.” 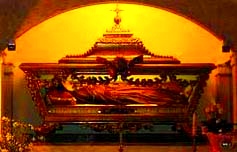 Striking miracles occurred on the very day of her burial and many more have occurred since then throughout the years. Shortly after her death Pope Innocent IV approved the veneration paid to her, and Pope Pius VI in 1806 renewed the approbation. To this day very many people journey to the church in which her body, still incorrupt, reposes.