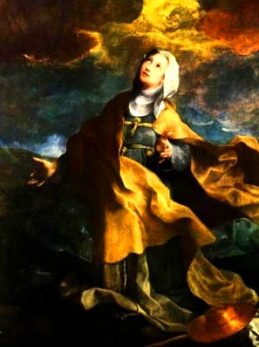 The town of Pesaro is situated on the shores of the Adriatic in Italy, not far from the famous shrine of Loreto. There, in 1300, a daughter was born to the wealthy and noble Metelli family, who received the name Michelina in baptism. The child was endowed with superior natural gifts, and in accordance with the tradition of the family she was brought up in the fear of the Lord.

When she was twelve years old, Blessed Michelina of Pesaro was married to a nobleman of the powerful family of Malatesta. Although Michelina was good and pious, it is said that her heart was divided between creatures and the Creator, as is often the case. Her husband and a son, with whom the marriage was blessed, occupied her heart more than was becoming to a Christian woman.

The Lord severed one of these ties by taking her husband to Himself when Michelina was only twenty years old. This was a severe trial for the young wife, but Blessed Michelina of Pesaro did not yet recognize the higher designs of God. Her maternal affections were now still more centered on her son.

About this time a pious Tertiary from Syria came to Pesaro, and edified the entire town by her fervor at prayer and the holiness of her life. Michelina also conceived a great veneration for this pious lady and invited her to take up her abode in her palace, promising to provide for all her needs so that she could serve God alone. The stranger gratefully accepted this hospitality, and almighty God rewarded Michelina by permitting her to learn to love God above all things, and all other things only in God.

Once on the feast of Pentecost she conversed with her Tertiary guest on the need of surrendering one’s heart to God. The latter spoke of it in glowing terms and declared it was necessary. “That may be true,” said Michelina, “but I cannot aspire to such perfection. My son, the tenderest object of my affections, occupies my heart too much, and my earthly possessions do not leave me free enough to offer by heart completely to God.”

“Let us then,” replied the Tertiary, “pray together that God may disengage your heart from those things which are an obstacle to your salvation and perfection.” The grace of the Holy Spirit was not wanting, and Michelina answered, “Ayes, let us. I, too, desire to serve God better than I have until now.”

The next morning both attended holy Mass and prayed fervently for this intention. At the close of Mass Blessed Michelina of Pesaro interiorly heard the voice of Our Lord: “I will set you free. I will take your son to Myself, and you shall henceforth belong to Me alone.”

When they arrived at home they found the child sick; and soon God took him from this world, in which he would have been in great danger because of the inordinate tenderness of his mother. The two women saw how the holy angels carried his soul to heaven.

The mother was now like one transformed. Her heart was no longer attached to temporal goods. She distributed them lavishly among the poor in spite of the remonstrances of her relatives. After a while she entered the Third Order of St Francis, and adopted the afflicted and the indigent as her new family. She became a mother to the orphans, the support of poor widows, the nurse of the sick, the comfort of the sorrowful; her house was the refuge of all unfortunate persons. She also practiced severe acts of penance in order to atone for her former life.

Toward the end of her life Blessed Michelina of Pesaro made a pilgrimage to the holy places, where she venerated the mysteries of Christ’s suffering so fervently that all present saw her in an ecstasy on Mount Calvary. Upon her return to her native country, she redoubled her prayers, practices of penance, and works of charity, until Our Lord called her to Himself on June 19, 1356. Her tomb in the Franciscan church was made glorious by numerous miracles. The Apostolic See approved her public veneration in 1737, whereupon the town of Pesaro chose her as its special patron.