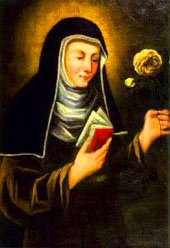 The family of the Nazzarei was one of the wealthiest and most distinguished of Matelica in the Italian province of the March. Matthia, however, esteemed virtue and nobility of soul more than all worldly nobility, and resolved, for love of Christ, to consecrate herself to His service in the state of virginity. When, therefore, her father planned to marry her to a young noblemen, Matthia firmly refused, declaring she was already espoused to the heavenly Bridegroom. Her father endeavored to force her into the marriage, but she fled from home to a convent of the Poor Clares where he aunt was the abbess. When her aunt hesitated to receive the fugitive, Matthia cut off her hair, and, laying aside her expensive garments, put on the first old habit she found.

Thus attired, she met her father in the reception room of the convent, when the enraged man appeared with the determination of bringing her back by force. Matthia dealt so gently and yet so convincingly with her father that he willingly gave his consent to her entrance into the convent.

After receiving the habit, Matthia showed such zeal and such perfection in virtue, not only during the year of probation, but afterwards as well, that when the abbess died a few years later, the sisters unanimously chose Matthia as her successor, despite her youthful years. The bishop of Camerino gladly gave his approval to their choice.

The youthful abbess looked upon herself not as the first in rank but rather as the lowliest among her sisters. She always picked out the lowliest tasks for herself. She was a shining example of all the religious virtues. She so loved to obey others that she made obedience pleasant to her subjects and never experienced any opposition from her sisters. A true daughter of St Clare, she loved poverty and observed it faithfully. She turned over the rich inheritance she received from her father to the poor and to pious projects, not retaining even the smallest part of it for herself.

To preserve her virtue from every shadow of impurity, she was very austere with herself throughout life, observing fasts and practicing rigorous corporal penance. She gained strength to persevere on the way of perfection by her habit of uninterrupted prayer.

Almighty God granted her the gifts of prophecy and of miracles, and the sick and the oppressed came from far and near to seek counsel and assistance from her.

Matthia lived thus for more than forty years until the day of her death, which she had foretold. On that day she gathered the sisters about her, fervently admonished them to persevere in chastity, poverty, and obedience, and in holy charity.

On the feast of the Holy Innocents in the year 1300, she gave her pure soul back to God. At her grave many crippled people received the health of their limbs again, the blind received their sight and the deaf their hearing. Pope Clement XIII and Pope Pius VI approved the annual celebration of her feast.

In 1536 the body was exhumed to be examined. Not only was the body incorrupt, but was found to be sweating profusely. In 1756 repairs were being made to the chapel, and the body was again examined. This time the saints body was still incorrupt, but also giving off a sweet, indiscribable fragrance. In 1758 a "blood-fluid" was seen coming from the saint's body, especially the hands and feet.