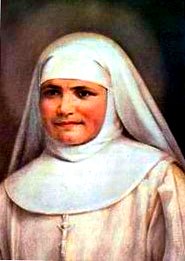 In May, 1904, this charming ornament of the Franciscan Missionaries of Mary knelt before Pope Pius X to ask his blessing before setting out on her journey to the Chinese mission. Fifty years later another Pius conferred on her the honors of the altar, when he beatified her on November 7, 1954.

Blessed Mary Assunta hails from Piceno, and was born in 1878. In her youth she was obliged to perform every manner of lowly service in order to help her parents, who were in straitened circumstances. She attracted everybody by her modest reserve, and nobody could have found it in him to speak a coarse word in her presence. Jesus in the tabernacle was the love of her soul.

After she had been invested with the holy habit among the Franciscan Missionaries of Mary, she formed a definite resolution which became the motto of her life: “I will become a saint!” She delighted in taking the last place.

On the journey to the Chinese missions in the spring of 1904, a severe storm arose. She was asked whether she was not afraid, but she calmly replied:

“I have nothing to fear. It is all the same to me whether I arrive at my goal or whether I am drowned in the depths of the sea. Just so that the will of God is accomplished.”

At the Franciscan mission of Tung-er-kow in Shansi, Blessed Mary Assunta Pallotta was at once appointed to duties in an orphanage. Meanwhile, her union with God was so intimate that no external occupation could disturb it. The task assigned her by Providence, to win the heathens for Christ by her holy and innocent life as well as by her holy death, was shortly to be accomplished.

Within a year after her arrival in this pagan land, Mary Assunta was attacked by typhus and died a victim of love on April 5, 1905, at the early age of twenty-seven years. Pagans as well as Christians hastened to her grave to implore her powerful intercession in the most varied needs.

In 1913 her remains were exhumed so that she could be moved to Tai-Yuan-Fou, and at that time Blessed Mary Assunta's body was found to be incorrupt. China is now a Communist state, and it is not known even if the little gravesite still exists.