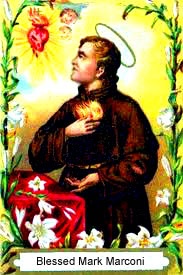 The son of poor and simple parents, Mark was born about 1480 at Milliarino near Mantua. From early youth he was endowed with a deep sense of piety and gave signs of extraordinary sanctity. At this time there was in Mantua a community of the Poor Hermits of St Jerome, who had been founded by the Tertiary Blessed Peter of Pisa. In other cities of Italy there were similar communities of hermits; and all of them observed the rule of the Third Order of St Francis until the year 1568, when they adopted that of St Augustine. Mark entered the Hermitage of St Matthew at Mantua when he was still quite young.

From the very beginning of his religious life, Mark won the admiration of the other hermits by the cheerfulness and promptness with which he carried out all the spiritual exercises, those which were ordinary as well as the most difficult. His one desire was to become as perfect an imitator of Christ as possible. Blessed Mark Marconi possessed the gift of prophecy and of miracles. The people revered him as a saint, and considered themselves fortunate if they could touch the hem of his garment.

Consider how living in the presence of God provided Blessed Mark with special light, by which he also learned to know himself better day by day. Just as, when the sun’s beams penetrate a room, we can more plainly see all the particles of dust in the air, which would otherwise be invisible and which we had not realized were there, so will the remembrance of an all-holy God who beholds us, reveal the stains and defects in our hearts of which we should not otherwise have been aware.

Mark was only thirty when he died on February 24, 1510. His incorrupt body is venerated in the cathedral, and he is called “the Glory of Mantua.” The cult of Blessed Mark which continued through the centuries was finally approved by St Pope Pius X on March 2, 1906. Blessed Mark Marconi may also be counted as one of the glories of the Third Order of St Francis.

We beseech Thee, O Lord, of Thy loving kindness, ever guard Thy household, that it may be freed from all adversities by Thy protection and in good deeds may be devoted to Thy name. Through Christ Our Lord. Amen.