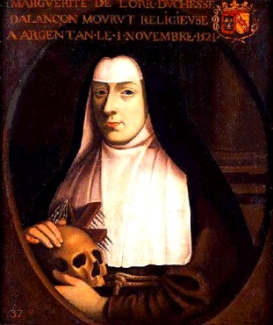 Blessed Margaret of Lorraine was born of the ancient noble family of the Dues of Lorraine. Her earnest efforts to lead a virtuous life attracted attention very early in her life. After the death of her husband, Duke Rene of Alengcon, she assumed the government of the duchy. In this she was guided solely by Catholic principles; and by means of prudent economy, she managed to save a significant amount of materials which she used to render aid to the poor and the needy. She took particular pleasure in nursing the sick and the lepers. She built churches, convents, and hospitals everywhere.

The subject matter taught in the schools and the instruction of the people were objects of particular solicitude to her. Hard-hearted landlords and selfish officials were dealt with by her with the greatest severity. Still, she remained very humble, and spent a great part of her day in meditating on the sufferings of Christ and in performing works of penance.

In later years, after she had turned the government over to her son, she was invested with the habit of the Third Order. And when that no longer satisfied her desire for perfection, she entered the convent of the Poor Clares at Argenton, which she herself had founded. Blessed Margaret aspired to perfection as a child, a woman, a ruler, a widow, a finally as a religious, and she succeeded in achieving her goal.

Every Christian is obliged to strive for perfection. It is not without reason that Our Lord says:

“Be you therefore perfect as your heavenly Father is perfect” (Mt. 5,48).

This obligation does not require the impossible of us. Everyone can love his neighbor, do good, and overcome himself. We must above all bear in mind that perfection does not consist in external practices, but rather in the disposition of our heart. The motive must be the love of God. All for the love of God!

Blessed Margaret of Lorraine died a saintly death at the convent at Argenton in the year 1527. Pope Benedict XV approved her veneration.

In 1792 the body of Blessed Margaret was exhumed and found incorrupt. Inside the casket was found a small reliquary which contained her heart.

During the French Revolution a group of Jacobins disinterred the saint's body to profane it, later placing it in a common grave. Only the bones and the saint's heart remain, and are now at the Monastary of Clarisses at Alencon.