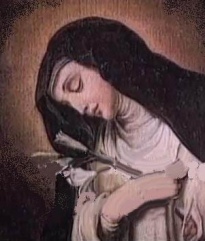 
Because she was dwarfed, blind, hunchbacked and lame, Blessed Margaret was kept hidden by her parents throughout her childhood. When she was sixteen, she was taken from Metola to the miraculous shrine at Citta-di-Castello, where a cure was anticipated. Unfortunately, no miracle occurred, and it is recorded that the child was left abandoned. She was cared for by various families of the city and earned money for her board by attending small children. Her cheerfulness, based on trust and love of God, endeared her to everyone. Blessed Margaret of Castello became a Dominican tertiary and devoted herself to the sick and dying, but she showed special solicitude toward prisoners.

It came to the attention of Blessed Margaret of Castello that a certain man named Alonzo was being falsely imprisoned. With no one to care for his wife and young son, they quickly became destitute. Alonzo was tortured by men who wished to learn if he had in fact committed any crime, and although innocent, his overly zealous jailers left him a permanent cripple. When Alonzo was not released, and learned that his son had died of starvation, he fell into despair and blasphemed against God and went into uncontrollable rages.

One day when Margaret visited Alonzo she fell into an ecstasy. Her face surrounded by a brilliant light, she levitated almost two feet into the air.

When the ecstasy ended, Margaret begged Alonzo to repent and cease his blaspheming. Alonzo tried to speak against God, but found he could not do so. Instead, he pleaded to Margaret, "Little Margaret, please pray for me."

Blessed Margaret also had the gift of prophesy. She lived with the Macreti family for a time, and they had a sixteen-year-old daughter named Francesca, whom Margaret spent time with teaching her the faith. One day Margaret said that both Francesca and her mother would become Dominican tertiaries. They did not agree with Margaret, as Mrs Macreti cared nothing about religion, and Francesca was expected to marry. Margaret did not back down, saying they would one day wear the habit until death.

Mr Macreti died after a few months, leaving his wife inconsolable. She finally found comfort in the Catholic Church. Eventually both she and her daughter asked to be admitted to the Dominican Order, where they remained faithful until death.

One day there was a fire in the house where Blessed Margaret was staying. The downstairs was completely engulfed in flames, and would soon trap Margaret upstairs. People were shouting for Margaret to come down when she calmly appeared at the top of the stairway. Removing her mantle, she threw it downstairs with instructions to cast it into the fire. No sooner was it done than the blaze was instantly extinguished.

The holy death of Blessed Margaret of Castello occurred on April 13, 1320, when she was thirty-three years of age. After her death, more than two hundred miracles occurred in confirmation of her heroic sanctity.

The preliminary steps toward the cause of her beatification were undertaken by the Dominican Order, but at various times it languished, until it was almost forgotten. During the sixteenth century, interest in her cause was rekindled after the discovery of her incorrupt body. On June 9, 1558, the bishop authorized the transfer of the Beata’s remains to a new coffin after it was noticed that the original one was rotting away.

The exhumation was undertaken in the presence of a number of official witnesses who were awe-stricken when the coffin was opened. While the clothing on the body had crumbled to dust, the body itself was found to be perfectly preserved, as though Margaret had just died. It was obvious that she had been a dwarf, her body measuring only four feet long. Her head was rather large in proportion to the rest of the thin figure. The forehead was broad, with the face tapering to the chin. Her nose was quite prominent, and her small, even teeth were serrated at the edges.

The witnesses noticed that the hands and feet of Blessed Margaret of Castello were small, that the right leg was an inch and a half shorter than the left (which caused her to walk with a limp) and that the arms were crossed in front of the body, with the left arm and hand being slightly raised without support. The body was thoroughly examined by physicians, who declared that no chemicals had been used to preserve it.

Blessed Margaret of Castello had often been heard to say, "Oh, if you only knew what I have in my heart!" Inside her heart were found three pearls on which appeared to be carved religious symbols, and the images of Our Lord, the Blessed Virgin, and St Joseph.

The body was reclothed in a fresh habit and was placed in a new coffin. Many miracles followed this ceremony, and the cause, which was undertaken with renewed interest, came to a successful conclusion on October 19, 1609, when the Church officially recognized Margaret’s sanctity, pronouncing her a beata and designating April 13 as her feast day.

The body of Blessed Margaret, which has never been embalmed, is dressed in a Dominican habit, and lies under the high altar of the Church of St Domenico at Citta-di-Castello, Italy. The arms of the body are still flexible, the eyelashes are present, and the nails are in place on the hands and feet. The coloring of the body has darkened slightly and the skin is dry and somewhat hardened, but by all standards the preservation can be considered a remarkable condition, having endured for over six hundred fifty years.

From: The Incorruptibles, TAN Books