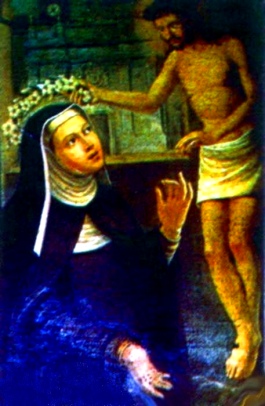 A member of the princely Roman family of the Colonna, Margaret was born in Rome, the capital of Christendom, in 1210. Very early in life she lost both her parents. She was then placed under the guardianship of her two brothers, John and James. When she had grown to womanhood, her older brother insisted that she enter a brilliant marriage. But Margaret, whose name signifies pearl, held her virginity in such high regard that she was willing to sacrifice all the glamour of the world in order to retain it. She firmly refused to yield to her brother’s plan, declaring that she would be espoused to none other than the immortal Spouse of souls. Her younger brother championed her resolution.

With two maids, Margaret withdrew to a quiet country house belonging to her family and situated in the mountains near Palestrina. There the group devoted themselves to practices of piety and penance, as well as to works of charity. They wore coarse garments, similar to those of the Poor Clares, and mapped out their daily routine as far as possible according to the strict rule of that order.

In her new life, Margaret’s relatives caused her many trials and annoyances. But she considered them as marks of the love of her Divine Bridegroom seeking in this way to disengage her heart from the world, so that she might belong to Him alone. And Christ our Lord actually appeared to her at this time and placed a crown of lilies on her head and a ring upon her finger.

In order to secure the merit of obedience, Blessed Margaret Colonna and her companions meant to join the Poor Clares of Assisi, who had already offered to receive them. But a grievous illness attacked Margaret and prevented her plan. Somewhat restored to health, she consulted her younger brother James in Rome, who had meanwhile become a priest and cardinal. At his suggestion, and with the approval of Pope Urban IV, Margaret turned the country house on the quiet mountain near Palestrina into a Poor Clare convent where she and several like-mined young women observed the rule of St. Clare as well as her continued infirmity permitted it. Almighty God rewarded her pious zeal with many consolations.

Also favors of another kind were not wanting. Our Lord gave her an opportunity to taste a little of the sufferings H had endured. A wound opened in her right side and kept growing wider and deeper, causing her untold suffering during the last seven years of her life. She thanked God for this favor up to the last day of her life. When that day came, she said before receiving Holy Viaticum:

“I thank Thee, dear Lord, for having permitted my body to become weak and infirm, so that I could the more freely return my soul to Thee.”

Assisted in her last moments by her brother James, and the prayers of her sisters, Blessed Margaret Colonna surrendered her soul into the hands of God on December 30, 1284.

Later, when the convent of Palestrina was transferred to Rome the sisters took with them the precious remains of their mother and foundress Blessed Margaret Colonna and had them entombed in their new convent of St. Sylvester. Innumerable miracles occurred at the grave of this holy virgin. In 1847 Pope Pius IX gave renewed approval to the veneration paid to her for centuries.