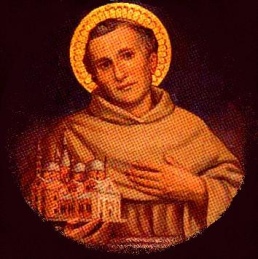 
When St Anthony in his apostolic zeal was occupied in reforming the inhabitants of Padua, a young man presented himself to him and humbly begged for the habit of the Friars Minor. This was in the year 1220.

Luke Belludi – such was the name of the young aspirant – belonging to one of the noblest families of Padua, had received a brilliant education. Far from imitating the usual conduct of his fellow students at the university, he kept to himself and employed his leisure hours in useful and holy occupations. St Anthony, who had discovered that Luke had a pure and humble soul, joined with a well-cultivated and talented mind, gladly recommended him to St Francis, who received him personally into the order.

St Anthony chose Friar Luke as his companion in the numerous missions which he gave from that time until 1231 at Padua, Rimini, and elsewhere. Blessed Luke made wonderful progress in religious perfection under the skillful direction of St Anthony, whose apostolic labors he continued after the death of the latter.

Padua had at this time fallen into the power of the truculent Ezzelino. Events of the year 1239 filled up the measure of her misfortunes. Many of her nobles were condemned to death, the mayor and his counselors were banished, and Blessed Luke Belludi, the guardian of the Friars Minor, was expelled from the city. Ezzelino gave the government of the city to his nephew Encelino, a man as wicked as he himself. The tyrant, irritated against the unhappy city by reason of her long and heroic resistance, ruled her with an iron grip. This unwarranted conduct was fatal to the university. Padua, formerly so flourishing, rapidly declined; and the beautiful church dedicated to St Anthony, which had been begun toward the close of the preceding administration, was left unfinished.

Friar Luke, however, had secretly reentered the city, and remained in careful hiding in the convent of St Mary. After the night office he and the new guardian frequently spent some time in prayer at St Anthony’s tomb, begging him to come to the assistance of the good city of Padua. One evening as these two holy persons were praying in the chapel dedicated to the saint, a voice suddenly issued from the tomb, assuring them that their prayer was heard, that the city was shortly to be delivered from its tyrannical master. The prediction was verified on June nineteenth.

Because of his great prudence, Blessed Luke Belludi was elected provincial minister, and as such founded many convents of his order. He was also instrumental in furthering the completion of the basilica of St Anthony. God granted him the gift of miracles and confirmed his sanctity even in this life.

After Blessed Luke Belludi died in 1287, his body was laid to rest in the same church in which St Anthony reposes, and was placed in the same marble sarcophagus in which the remains of the great saint were once enclosed.

The veneration accorded to Blessed Luke from the time of his death was continually increased, and Pope Pius XI added his name to the list of the beatified.