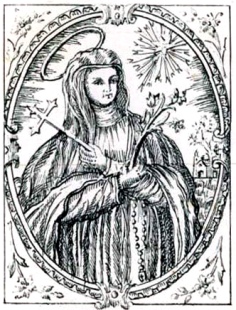 Lucy was born of devout and distinguished parents at Caltagirone, in Sicily. Heaven watched over her in a special way from her earliest years. When she was six years old, she went to the country with her mother one day, and there climbed a fig tree to pick figs. As frequently happens in the southern part of Europe, a storm arose very suddenly. Lightning struck the tree and split it asunder. The child lay on the ground as if dead. But an old man suddenly stood beside her, picked her up, and led her, as if nothing had happened, to the house to which her mother had run for safety. At the door Lucy asked her rescuer who he was. He replied: “I am St Nicholas, whom your parents honor in a special way; as a reward, I have taken you under my special protection.” Thenceforth Lucy was devoted to works of piety. It was her greatest pleasure to attend divine services and to be of assistance to the poor.

Blessed Lucy of Caltagirone had just about attained the age of young womanhood when a Tertiary from Salerno came to Caltagirone to visit some relatives. She was an object of edification to everybody. Lucy became a companion of this Tertiary and then joined the Third Order herself. When the young woman returned to her native town, Lucy went with her. The young woman received Lucy into her own home as her spiritual daughter, and as a result of her guidance, Lucy made daily progress in perfection. She led a life of recollection and practiced rigorous penance. At the same time she was sympathetic and kind to the poor and the sick.

At the death of her friend, who had been like a mother to her, Lucy entered the convent of the Tertiaries of St Mary Magdalen in Salerno. Even as a novice she was a model of humility and obedience. Her heart was occupied with the contemplation of the sufferings of Christ, and she endeavored to share His sufferings by crucifying her own flesh. Blessed Lucy of Caltagirone was favored by God with special graces, and ere long the fame of her sanctity spread far and wide. People came to her from the surrounding towns to ask her prayers or to seek advice. No one in distress ever left her without being consoled, and at her recommendation many sinners were converted and pious souls were encouraged to strive for still greater perfection.

After a long and painful illness Lucy entered the joys of heaven on September twenty-sixth. It is not quite certain in what year she died, but it was about the year 1400. The numerous miracles that occurred at her grave were ample testimony of her sanctity. A great number of silver eyes have been left at her tomb, because many who suffered from diseases of the eyes, and even blind persons were cured through her intercession. Pope Leo X confirmed the uninterrupted veneration with which Blessed Lucy of Caltagirone has been honored.