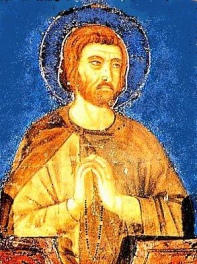 
Blessed Luchesio Modestini was a merchant in the little town of Poggibonzi in Tuscany. More than most merchants, he was so entirely and solely concerned with material success that he was generally reputed to be an avaricious man. His wife, Buonadonna, was of a similar disposition.

Then the grace of God touched the husband. Blessed Luchesio realized how foolish it is to strive only for worldly goods, of which he could take nothing with him to eternity, meanwhile forgetting about his soul's salvation, as he had, unfortunately, been doing until then. He began to practice works of mercy and to perform his religious obligations with fidelity; he succeeded in winning his wife over to a similar outlook on life.

Since they had no one to care for but themselves, and Luchesio feared that in conducting his business he might relapse into covetousness, he gave up his business entirely. He and his good wife divided everything among the poor and retained for themselves only so much acreage as would suffice for their support. Luchesio tilled this with his own hands.

About this time St Francis came to Tuscany. After his sermon on penance, hosts of people desired to leave all and enter the convent. But the saint admonished them calmly to persevere in their vocation, for he had in mind soon to give them a special rule according to which they could serve God perfectly even in the world.

At Poggibonzi Francis visited Blessed Luchesio, with whom he had become acquainted through former business transactions. St Francis greatly rejoiced to find this avaricious man so altered, and Luchesio, who had already heard about the blessed activities of St Francis, asked for special instructions for himself and his wife, so that they might lead a life in the world that would be pleasing to God.

St Francis then explained to them his plans for the establishment of an order for lay people; and Luchesio and Buonadonna asked to be received into it at once. This, according to tradition, they became the first members of the Order of Penance, which later came to be called the Third Order of St Francis.

If Luchesio and Buonadonna were really the first Tertiaries, they must have become such not long after St Francis founded his First Order in 1209. The first simple rule of life, which St Francis gave to the first Tertiaries at that time, was supplanted in 1221 by one which Cardinal Ugolino prepared in legal wording. And in the same year Pope Honorius III approved this rule verbally. For this reason the year 1221 is often given as the date of the founding of the Third Order of St Francis.

After Luchesio had put on the gray garment of a Tertiary, he rapidly advanced toward perfect holiness. He practiced penitential austerities, often fated on bread and water, slept on the hard floor, and at his work bore God constantly in his heart. His generosity to the poor knew no bounds, so that one day there was not even a loaf of bread for his own household. When still another poor man came, he asked his wife to look whether there was not something they could find for him. That vexed her and she scolded him severely; his mortifications, she said, had well nigh crazed him, he would keep giving so long that they themselves would have to suffer hunger.

Luchesio asked her gently to please look in the pantry, for he trusted in Him who had multiplied a few loaves for the benefit of thousands. She did so, and the marvel of it! The whole pantry was filled with the best kind of bread. From that time on Buonadonna vied with her husband in doing good.

When a plague raged in Poggibonzi and the surrounding places, Luchesio went out with his laden donkey, to bring the necessaries to the sick. When he did not have enough to supply all, he begged for more from others in behalf of the distressed.

Once he carried a sick cripple, whom he had found on the way, to his home on his shoulders. A frivolous young man met him, and asked him mockingly, "what poor devil is that you are carrying there on your back?" Luchesio replied calmly. "I am carrying my Lord Jesus Christ." At once the young man's face became distorted, he cried out fearfully, and was dumb. Contritely he cast himself on his knees before Luchesio, who restored his speech to him by means of the Sign of the Cross.

The time had come when the faithful servant of God was to receive the reward for his good works. When he lay very ill, and there was no hope for his recovery, his wife said to him, "Implore God, who gave us to each other as companions in life, to permit us also to die together."

Luchesio prayed as requested. Buonadonna fell ill with a fever, from which she died even before her husband, after devoutly receiving the holy sacraments. Luchesio passed away with holy longing for God on April 28, 1260. At his grave in the Franciscan church at Poggibonzi many miracles have occurred. His continuous veneration as Blessed was approved by Pope Pius VI.