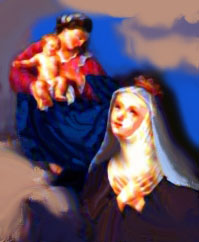 On the feast of the Holy Innocents in the year 1461, a daughter was born to Blessed Amadeus, duke of Savoy. Blessed Louise of Savoy, she was to become more distinguished in the world for her innocence and sanctity than for the nobility of her birth.

From childhood Blessed Louise showed a marked love for prayer and retirement. On the vigils of the feasts of our Lady she fasted on bread and water. In compliance with the wish of her mother, a sister of King Louis IX of France, Louise wore costly garments and jewelry as was becoming her princely rank; but underneath them she wore a garment of haircloth, and she always looked upon her external finery as a reminder to adorn her soul with virtues.

Blessed Louise of Savoy possessed such innocent simplicity that pride and vanity were wholly foreign to her. Still with the simplicity of a dove she also combined great prudence in evading the dangers of a life at court, to which she was exposed.

Bl Louise had already decided to consecrate herself to God in the state of virginity when her uncle and guardian, the king of France, desired her to marry the prince of Chalon. Louise believed that God was thus manifesting His will in her regard; and so she gave her hand to the virtuous young prince.

He was pleased to note how her example and authority checked the excessive luxury and the frivolous customs prevailing at court. Not only did she reform the habits of the ladies of the court, but even the men were won over to a Christian life. If anyone of them was caught cursing or using unbecoming language, she required him to do penance by giving alms for the poor.

Blessed Louise of Savoy and her husband attended the dances and plays that were given, but never took part in them themselves. They went there only to prevent anything disorderly. She is reported to have said what St Frances de Sales said at a later date:

"Dances and plays are like mushrooms, of which the best are not worth much."

When she was but 27 years old, Louise lost her devoted husband. She declined all offers of a second marriage, even those coming from the most honorable suitors. She wished now to live in retirement and very simply, and to devote herself to works of penance, piety, and Christian charity. She used her great wealth in carrying out an extensive program of charity.

There were no children to claim her maternal care; and since she desired to live in close union with God, she entered the convent of the Poor Clares at Orbe after overcoming great obstacles. Here the princess was a model to all in humility, poverty, and self-abnegation. She observed all the precepts of the rule and of obedience most conscientiously, and was always very grateful for any reprimands she received. She fostered a tender devotion to the sufferings of Christ and to our Blessed Lady, from whom she sometimes received special favors.

A serious illness seized Louise when she was 42 years old. After she had received the last sacraments with great devotion, her death agony began, but she was still able to pronounce the words from the Office of Our Lady:

O Fount of Mercy, Mother mine, Through whom God sends us grace divine, Free me from sin, and lend thy aid When death's dark hour makes me afraid.

Then she surrendered her pure soul into the hands of her Creator on July 24, 1503. God glorified her by many miracles, and so Pope Gregory XVI confirmed her veneration in 1839.