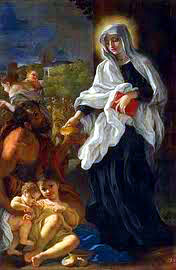 Louise first saw the light of the world at Rome in the year 1474. Her parents belonged to the distinguished families of this city because of their wealth, but still more because of their piety. They bestowed great care upon the training of their daughter, and she responded fully to their efforts, so that she developed into a model for all young women. She had resolved to remain unmarried; but when her parents urged her to be betrothed to an illustrious young man, she believed she recognized the will of God in their desire and agreed to the marriage.

But even in the married state, in which she remained attached to her husband with genuine love, she sought above all things to please God. Her attire was very plain, and even away from home she avoided frivolous pomp and luxury. God blessed their union with three daughters, whom she was careful to rear above all in the love and fear of God.

When Blessed Louise Albertoni was but thirty-three years old, she lost her husband in death. After her daughters were provided for, Louise thought of nothing but to dedicate herself to the service of God. Publicly she took the habit of the Third Order, practiced the severest penances, and was so irresistibly drawn to the contemplation of the sufferings of Our Lord and they were so constantly before her mind, that she continually wept, and it was feared that she would lose her sight.

She bore a special love toward the poor as special members of Christ. She used the abundant income of her fortune entirely for their support. But she strove to conceal her liberality. With this intention she often hid pieces of money in the bread that was given to the poor at her door, and then begged Almighty God that He would let it fall to the lot of such as needed it most. Her benevolence knew no bounds. Sometimes she lacked even the necessaries for herself. But then she rejoiced to be like Christ, who, being rich, became poor out of love for men.

God repaid her with extraordinary graces. He granted her the gift of miracles and frequent ecstasy. He also told her beforehand of the day of her death.

When her end drew nigh, she received the last sacraments with great devotion. Then looking at the crucifix with the tenderest pity, she kissed it and said: “Into Thy hands, O Lord, I commend my spirit.” Thereupon she breathed forth her soul on the day that had been announced to her, which was January 31, 1533.

Her body rests in the church of St Francis on the Tiber, and her feast is celebrated in Rome with great solemnity. Pope Clement X beatified Blessed Louise Albertoni in 1671.