Blessed Ladislas was born at Gielniow, a town in the diocese of Gniezno, Poland. The very first fruits of his life he offered to God, who alone had the right to them. In compliance with the wishes of his parents, he pursued his studies at the University of Cracow, and after making great progress in leaning and virtue, he recognized the call of God to forsake the world.

In 1464 Blessed Ladislas of Gielniow entered the convent of Friars Minor at Warsaw, which had been quite recently founded by St John Capistrano. There the young man strove so earnestly for perfection that the highest hopes were placed in him. He observed all the austerities of the order most faithfully, and regarded interior mortification as the goal of all exterior practices of penance. His profound humility and perfect obedience greatly edified all.

As soon as he was ordained to the priesthood, he asked, in his great zeal for souls, for permission to go among the Kalmuks in neighboring Russia, in order to preach the Gospel to this heathen nation. The permission was granted, but Ladislas met with so many obstacles in that country that he was obliged to return without achieving any success. He now labored without tiring at his apostolic work in Poland.

In towns and villages Blessed Ladislas of Gielniow preached the word of God, and his zeal, coupled with a holy life, produced blessed results everywhere. He had a special way of presenting for the consideration of the faithful the suffering of Christ and the glories of the Mother of God. Above all he recommended the recitation of the Crown of the Seven Joys of our Blessed Lady.

Because of his outstanding qualifications, Ladislas was five times elected to the office of provincial. During his administration he sent many missionaries to Lituania and to Russia, where it was now possible to convert many heathens to Christendom, a task which he had once attempted in vain.

In the year 1498 Poland was in great danger of being overwhelmed by an army of 70,000 Tartars, who were allies of the Turks. Bl Ladislaus appealed to the frightened population, asking them to pray and believe in God. Prior to the enemies arrival the rivers overflowed, flooding the region. This was followed by freezing weather that turn the water to ice. Then came snow, and thousands of the enemy died. What remained were defeated in battle by Prince Stephen of Poland.

Broken with age and the fatigues of an exhausting apostolate, he completed his last term as provincial. The fathers who attended the chapter did not wish to assign him a definite convent for his residence, but left it to him to choose one for himself. But the holy old man said:

“My fathers, so you wish that at the end of my life I should live according to my own will and fancy! Never before have I done that, and far be it from me ever to follow my own will. Dispose of me entirely according to your own good pleasure.”

He was then appointed guardian of the convent at Warsaw. There he had begun his religious life, there he was also to close it in the very next year.

On Good Friday Blessed Ladislas of Gielniow preached a sermon on the sufferings of Our Lord. All at once his countenance was transfigured. He fell into ecstasy and was raised in the air above the pulpit before the eyes of the astonished multitude. When the ecstasy ended, he was sized with a fever, and about a month later, on May 4, 1505, he went to his reward.

Many miracles occurred at his tomb in the church of his order at Warsaw. Pope Benedict XIV sanctioned the veneration paid to him. 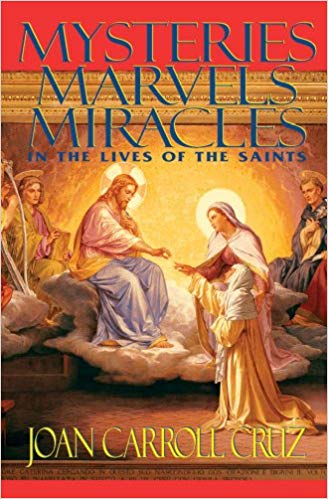 Includes hundreds of true stories of miraculous phenomena in the lives of the Saints: bilocation, levitation, multiplication of food, etc. Fascinating, hard to put down, and helpful to strengthen one\'s faith. This world CANNOT be all there is -- and this book helps to make that truth more REAL to each one of us! An excellent gift book, suitable for all ages. Impr. 597 pgs 77 Illus, PB.