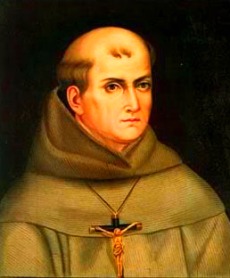 Born at Petra on the Spanish island of Malorca on November 24, 1713, Blessed Junipero Serra entered the Franciscan Order at the age of sixteen and was ordained a priest in 1738. He received the doctorate in theology even before his ordination. For eleven years he taught philosophy in the Lullian University at Palma.

Junipero Serra won great fame as a pulpit orator. As a teacher he was equally successful. The pathway to fame and honor was clearly open to him, but he willingly turned his back on all this, and longed to be a missionary to the Indians of the New World. His superiors yielded to his request and allowed him to join a band of missionaries who were getting ready to go to Mexico.

It was on New Year’s Day, 1750, that he entered the portals of the College of San Fernando in Mexico City. From 1750 to 1758, in the wild and isolated Sierra Gorda near Querétaro, Mexico, he taught the fierce Indian worshippers of the sun the way of civilization together with the truth and the life of the Faith.

For the next ten years Blessed Junipero Serra walked all over Mexico for Christ, preaching missions in rowdy seaports, crude mining camps, and cultured cities, recalling innumerable sinners to repentance.

At the age of fifty-six, after a year in the peninsula of Lower California where he founded one new mission, Father Serra began his greatest work, founding the first of many missions along the coast of the state of California.

The first mission founded after the 900-mile journey north was San Diego de Alcala (1769). That year a shortage of food almost canceled the expedition. Vowing to stay with the local people, Saint Junipero Serra and another friar began a novena in preparation for St Joseph’s day, March 19, the scheduled day of departure. On that day, the relief ship arrived.

At San Diego Blessed Junipero Serra confirmed nearly 6,000 Indian converts. “As long as life lasts,” he said on one occasion, “I will do all I can to propagate our holy Faith.” Combining a deep spirituality and joy in the service of God with a down-to-earth practicality, he laid the foundations of California’s present-day agriculture and stock-raising.

Other missions followed: San Carlos Borromeo, Monterey/Carmel (1770); San Antonio and San Gabriel (1771); San Luís Obispo (1772); San Francisco and San Juan Capistrano (1776); Santa Clara (1777); San Buenaventura (1782), Mission Santa Barbara (1786). Twelve more were founded after Serra’s death. The state’s great coastal cities grew out of the missions he established. His zeal and vision caused him to urge explorations by sea to Alaska, and overland to New Mexico. In thirty-five years as a missionary, he walked 10,000 miles despite an ulcerated leg. His was a life-long martyrdom of labor, loneliness, and sacrifice.

To become a canonized saint, the candidate must have practiced the three divine virtues and four cardinal virtues in an heroic degree. Father Serra’s faith is seen in his apostolic life; his hope in his spirit of piety; and his charity in both. His prudence is discernible especially in the wise measures he adopted on behalf of the Indians. These Indians often made his labors difficult because of their superstitious ideas.

For instance, just as he raised his hands to pour water over the first child offered for baptism, the fearful parents snatched away their babe and fled. The faithful discharge of his duties despite disappointments, opposition, and bodily sufferings gave evidence of his fortitude. He strenuously defended the Indians and the rights of the Church throughout his hard mission life. His temperance manifested itself in his life of mortification. Already on his journey to America he manifested unusual heroism. The voyage lasted more than ninety days, during which the travelers suffered from want of water. He took the scarcity of water as a training for the future and naively remarked when he was asked whether he was not suffering from thirst, “Not especially, since I have found the secret of not feeling thirsty, which is, to eat little and talk less, so as to not waste the saliva.”

Another proof of his heroic virtue is found in his refusal to avail himself of the transportation provided from Vera Cruz to Mexico City. He and a companion started on that trip of a hundred leagues, relying solely upon Providence and the goodness of the people whom they would meet.

Father Serra died at Mission San Carlos, also called Carmel, on August 28, 1784, and was buried in the mission church. In 1934 preparations began to present him as a candidate for sainthood, and legal proceedings held in California were forwarded in 1950 to Rome.