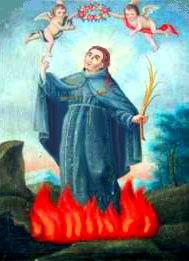 Blessed John of Prado, the son of prominent parents, was studying philosophy at the famous Universtiy of Salamanca, Spain, when, enlightened by the Holy Ghost, he resolved to devote all his energies to the acquisition of the wisdom of Christ. In the light of that wisdom he soon recognized the vanity of the world and received the habit of St Francis in the province of St Gabriel. The young novice distinguished himself among the zealous religious by perfection in every virtue.

Burning with love for God and for immortal souls, John soon requested permission to go among the infidels to announce the Gospel to them. But his master in the religious life advised him for the present to offer his burning desires as a sacrifice to God and to prepare himself so much the better for the ministry of saving souls where it would serve his province best. John complied willingly. As soon as he was ordained a preist, he preached with great success. In due time he administered various offices in the order, and was even appointed provincial of the newly erected province of St Didacus.

But Almighty God, who has regard for the desire of pious hearts, so arranged matters that John’s long-cherished wish could be fulfilled. Pope Urban VIII, who ascended the Chair of Peter in 1623, sent him with special powers to Morocco, Africa, to comfort the Christians who were being held as captives there by the Mohammedans and who were in great danger of losing their faith.

After endless difficulties, John arrived in Morocco, cleverly arranged for admittance to the prisoners, comforted them, administered the holy sacraments, and fortified them wonderfully by his inspiring exhortations, so that they were ready to suffer everything rather than deny the Christian Faith.

When the Mohammedan king learned of John’s activities, he was enraged and had John put in chains and imprisoned. But John kissed the chains with ardent joy and cried out: “Now, O Lord, I am aware of Thy great love for me! How have I merited such a grace?”

Shacked hand and foot, Blessed John of Prado was then led out to work a treadmill. At the work he was maltreated with blows by a brutal servant. But the holy martyr continued to thank God for the torment and prayed for his tormentors. The king had him brought before him several times in the hope of getting him to apostatize; but always in vain. Still more infuriated, the tyrant had John cruelly scourged, and he himself dealt John a blow on the head with a sword. At the moment the martyr’s head was struck it was surrounded with heavenly light.

But the obdurate king commanded that a great fire be kindled and that John should be thrown into it. Even amid the flames, however, John continued to preach Christ to the bystanders, until, overwhelmed with stones by the executioners, he sank down into the fire. His soul arose to receive the victor’s palm.

The province of St Didacus, with the consent by the Apostolic See, chose Blessed John of Prado as the patron of its missions in Morocco; and after many miracles had been wrought at his intercession, Pope Benedict XIII placed John among the number of the blessed martyrs.