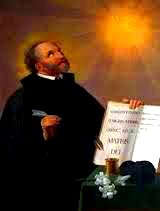 Blessed John Lobedau was born of devout parents at Thorn in West Prussia. As a young man he entered the Franciscan Order. The friars of the Saxon province had founded a convent at Thorn in 1239, and later a second convent at Kulmsee. By dint of hard study John became quite a scholar, and labored with marked success as a renowned preacher in places where Christianity had recently gained a foothold.

John was no less renowned because of the holiness of his life. At home in the convent, he spent most of his time alone in his cell, absorbed in meditation and holy contemplation. The mystery of the incarnation of the Son of God held a special attraction for him. Over and over he reflected on the boundless love and condescension that inducted the infinite God, the Creator and Lord of the universe, to assume human nature for the sake of mankind, to be born, and to be carried about in the arms of the Virgin Mother as a small, helpless child. The Blessed Virgin frequently appeared to Blessed John Lobedau with her Divine Child, and conversed with him on the mysteries of our redemption.

It happened one day, while Father John was living in the convent at Kulmsee, that on passing his cell, certain of his brethren heard someone speaking. Their astonishment at recognizing the voice as that of a woman knew no bounds. The worst suspicions thrust themselves on the minds of the brethren, who had supposed their brother to be a saint. To add to their consternation, they presently heard also the voice of a child crying. Justly shocked, they rapped at the door, but Father John gave no sign that they might enter. But when they threw open the door, they found their holy brother alone, absorbed in prayer and weeping pitifully.

The Father Guardian then commanded John in obedience to tell what had taken place. John admitted that the Blessed Virgin and the Divine Child had been with him, and that the latter had wept to think that the Catholic religion, which had been so recently introduced in those parts, was again to be exterminated and the various places of worship were to be destroyed.

Filled with remorse at their evil suspicions, the awestruck brethren left the cell of Father John and went their ways. The holy man spent the last years of his life in almost continuous prayer.

Blessed John Lobedau died at Kulmsee on October 9, 1264. Many miracles occurred at his grave. So generally was he venerated that his feast came to be observed as the patronal feast of the country until the latter fell away and embraced Lutheranism. But in more recent times, at the request of the bishops of Kulm, the Apostolic See gave renewed approval to the veneration of Blessed John. This, however, seems to have been merely permission to resume the popular veneration of Blessed John which was interrupted for a long time by the protestant Reformation, and does not appear to have been an equivalent beatification.