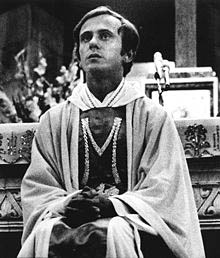 
Blessed Jerzy Popieluszko was born September 14, 1947, on a farm in the small village of Okopy located in North Eastern Poland. His parents Wladyslaw and Mariana were devout Catholics and he was baptized Alphons Popieluszko two days after his birth. Blessed Jerzy was a fragile child but as his parents stated he made up for any physical infirmities in strength of character.

The country into which Blessed Jerzy was born was one suffering from the aftermath of the reign of terror by the Nazi’s and the ongoing persecution of the Church by the Communists since the country’s occupation by the Russians in the Second World War. Okopy, the geographical center or “heart” of Poland was a rural village and thus its school system was not as deeply infiltrated with the sociology of the communist regime, but nevertheless Bl Jerzy suffered for his Faith while yet in school. Each morning before classes began Bl Jerzy would walk three miles to serve Mass, and then after classes were over in the evening, would return to the Church to pray the Rosary. His spirituality was ridiculed and he was accused by his teacher of praying too much.

As a precaution due to the harassment he received Bl Jerzy kept secret his intention to join the seminary for fear that if it were known the results of his exams would be altered. After graduating high school in 1965 while his friends were at the school ball, Blessed Jerzy Popieluszko was on a train headed for the seminary in Warsaw. He had chosen Warsaw due to its closeness to the monastery of St Maximilian Kolbe, a favorite saint of Bl Jerzy. Although against the agreement of 1950 between the Church and State, after one year of seminary training Bl Jerzy was drafted into the military for a two year tour in a special unit for clerics in Bartoszyce.

The plan for drafting clerics into the service was to indoctrinate them with the communistic ideal and cause them to lose their vocation. In spite of bitter persecution ensuing from the practice of his Faith, Blessed Jerzy Popieluszko firmly defied the authority’s attempt to marginalize Catholicism. On one occasion, when Bl Jerzy refused to crush his rosary beneath his heel he was cruelly beaten and placed in solitary confinement for a month. Also on account of his refusal to remove a medal from about his neck he was forced to stand for hours in the freezing rain. He was also made to crawl around the camp on his hands and knees as a punishment for saying the rosary. The results of this barbarity were that on the completion of his two year tour, Bl Jerzy had to undergo a life threatening surgery to undo the damage done to his heart and kidneys from his beatings. The recovery caused his ordination to be delayed, but on May 28, 1972, he was ordained with his name changed from Alphons to Jerzy by Cardinal Wyszynski.

Blessed Jerzy Popieluszko was first stationed taking care of several small parishes where his work was greatly appreciated. In January of 1979 he collapsed while saying Mass, and was sent to stay in a hospital to recover. Afterwards, he was given the duty as chaplain for the medical niversity of St Ann in Warsaw. A year later he was transferred to his last parish, St Stanislaus Kostka in Warsaw.

When Solidarity met in the Lenin shipyard in the summer of 1980, Bl Jerzy was the chaplain sent to the striking workers. The success of Solidarity helped to inspire Bl Jerzy, and every month afterwards he would offer a Mass for the Homeland and give a sermon to inspire people to follow the maxims of the Gospel, primarily by abandoning violence. Bl Jersey also organized a relief effort to help the families suffering from the loss of their jobs and livelihood as a result of defending the Faith, or the government having declared martial law. The government grew more and more frustrated with Bl Jerzy as more and more people flocked to him, and at the monthly Mass for the homeland had guards stationed at every block corner to watch him. Bl Jerzy went out of his way to be kind to these guards, calling them his “Guardian Angels” and even bringing them coffee in the cold Polish winter.

On December 13, 1982, a bomb was left on Bl Jerzy’s doorstep which would have killed him if he had answered the door. The next year, in August of 1983, the police opened a formal case against him and in December he was summoned to the prosecutor’s office. While detained, the police broke into his house to fill it with explosives and anti-government propaganda so they could have a cause to arrest him and launch a slur campaign.

While imprisoned with hardened criminals, Blessed Jerzy Popieluszko stayed up all night speaking with a murderer, and finally hearing the man’s confession. After being released from prison, Bl Jerzy was interrogated 13 times between January and June of 1984. In September he was planning his annual pilgrimage to Jasna Gora when he received threats warning him, “If you go to Jasna Gora you are dead.”

On October 13, 1984, an attempt was made on his life by means of a staged car accident, though Bl Jerzy was saved due to his excellent driving ability. On October 19, 1984, after offering Mass in Bydgoszcz, Bl Jerzy left with his driver for the 161 mile return trip to Warsaw. Thirty minutes into the drive the car was flagged down by two uniformed men for a traffic check near the village of Tourn. The uniformed men were actually officers of the security service and, on asking Waldemar Chrostowski, the driver, to hand over the keys to the car, handcuffed him and forced him into the back seat of their vehicle at gunpoint. Bl Jerzy was then grabbed and brutally beaten senseless with fists and clubs and thrown into the trunk of the car, which then sped off.

A few miles later Waldemar Chrostowski managed to escape the car and ran to the local Church to alert the authorities. Meanwhile, the two officers stopped the car to fasten down the trunk and gag Bl Jerzy, who was shouting and had almost managed to pry open the trunk. Bl Jerzy momentarily escaped them and ran into the woods, but was soon recaptured and beaten so savagely that his face and hands were unrecognizable. He was then driven to a reservoir on the Vistula River. Bl Jerzy’s hands and feet were tied with a noose fastened around his neck so that if he straightened his legs it would suffocate him. His mouth was stuffed with cloth, blocking the airway, and his nose was closed with sticking plaster. Finally, having tied a bag of rocks to his feet, they threw him into the reservoir.

The body of Bl Jerzy was not discovered until ten days had passed, and his funeral was held on November 2. An autopsy revealed that he may have still been alive when thrown into the reservoir.

The cause for his beatification began in 1997 and in 2008 Blessed Jerzy Popieluszko was elevated to the statues of Servant of God. On December 19, 2009, Pope Benedict signed the decree recognizing the martyrdom of Bl Jerzy Popieluzko. On August 6th, 2010, in the presence of his mother, who was over 100 years old, Bl Jerzy was solemnly beatified.

The last public words spoke by Blessed Jerzy Popieluzko during the meditation on the rosary October 19, 1984, give a summary of his life and may serve as a guiding star in ours.

“In order to defeat evil with good, in order to preserve the dignity of man, one must not use violence. It is the person who has failed to win on the strength of his heart and his reason, who tries to win by force…Let us pray that we be free from fear and intimidation, but above all from the lusts for revenge and violence.”