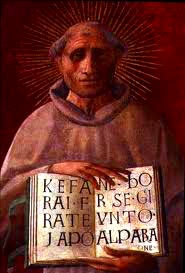 About the year 1230 a son was born to the noble family of the Benedetti at Todi in northern Italy. He received the name of Giacomo (Jacomo) or James in baptism. As a young man he devoted himself to the study of law and soon became a very capable and celebrated lawyer. At the same time Blessed Jacopone of Todi was very proud, vain, and worldly-minded. His young wife Vanna, on the other hand, was humble, devout, and generous. She regretted the worldly disposition of her husband, and endeavored to make amends before God for many of his failings.

One day in 1268, yielding to the wish of her husband, she attended a public tournament which was being held at Todi. Suddenly and unexpectedly, the stand in which she and many other noble women were seated, collapsed, and she was fatally injured. When her clothes were removed, it was seen that she wore about her waist a penitential girdle. James was deeply shaken at the sight. It was surely for me, he thought to himself, that she was doing such penance.

On the spot Blessed Jacopone of Todi resolved to abandon the vanities of the world, to live in extreme poverty, and for Christ’s sake to become a fool. He divided his possessions among the poor and entered the Third Order. Clothed in rags, he went about the streets of the city, an object of derision to the children and horror to the adults, laughed at and mocked as a fool and despised as a penitent by many who had once admired him as a learned and prominent man. In derision he was given the name of Jacopone, that is, “Crazy Jim.” He rejoiced in the name so much that he never wanted to be called otherwise.

After ten years of such humiliation Blessed Jacopone of Todi asked to be admitted into the Order of Friars Minor. The repute of his folly, however, had gone ahead of him to the convent, and so he met with difficulties. He then composed a beautiful poem, which is still extant, on the vanity of the world, and its merit opened the way for his admission into the order in 1278. From that time forward he lived an unusually rigorous life, striving hard to achieve perfection in every virtue. Out of humility he declined to be ordained a priest, yet he accomplished much good by his thoughtful and tender hymns, which he wrote in the vernacular.

Is it possible for a good and holy man to find himself suddenly on the wrong side in a conflict? That is what happened to Brother Jacopone in his old age. Having become a leader of the Spirituals, those friars who sought to imitate the poverty of St. Francis in a very strict manner, Jacopone also became associated with the two Colonna cardinals, Jacopo and Pietro, who were regarded as protectors of the Spirituals. These cardinals were also friends of Pope St Celestine V, who ruled the Church during the latter half of 1294 and then resigned. Unfortunately the Colonna cardinals rebelled against Celestine’s successor, Boniface VIII, and questioned the validity of his election. Jacopone, who was undoubtedly in good faith, was with the Colonna cardinals when their fortress at Palestrina fell in September, 1298; and so, at the age of sixty-eight he was excommunicated and thrown into prison. Although Jacopone now realized he had made a mistake and begged Boniface VIII for absolution, it was only five years later, in October, 1303, that Boniface’s successor, Benedict XI, absolved him and released him from his dungeon.

Jacopone had borne the hardships of his imprisonment in the spirit of penance; and he now spent the last three years of his life among his brethren, a more spiritual man than before. It was probably at this time that he wrote that masterpiece of Latin hymnology, the Stabat Mater. During those last years Blessed Jacopone of Todi did not cease to weep.

On Christmas eve, 1306, while he and some of his brethren were in the Poor Clare convent at Collazzone, Jacopone knew that his last hour had come; and, like St Francis, he welcomed Sister death with song. His friend, Blessed John of La Verna, miraculously appeared on the scene and administered the last sacraments to him. Then Jacopone sang one of his favorite poems:

“Jesus, In Thee is all our trust, high hope of every heart.”

When Blessed Jacopone of Todi had finished his song, he closed his eyes; and, it is claimed, he died from excess of love for the Infant Jesus, just as the priest who was celebrating the midnight Mass intoned the Gloria in Exclesis Deo; “Glory to God in the highest, and on earth peace to men of good will!”

From the time of his death, Brother Jacopone was venerated as a saint; and in popular devotion he has been called Blessed Jacopone through the centuries. In 1596 his remains were enclosed in a magnificent tomb and placed in the Church of San Fortunato at Todi. At different times, for instance in 1868-1869, attempts were made to have his cause of beatification introduced in Rome; but thus far his veneration as Blessed has not been officially approved.