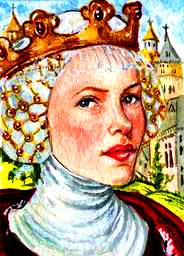 Isabella was the sister of King Saint Loius IX of France. Her mother, the saintly Queen Blance, bore this child special affection because, after the death of her husband, Isabella was the only daughter still living. Her cousin was King Saint Fernando III of Castile and Leon. Isabella was endowed with remarkable gifts, and special attention was paid to educate her in the requirements of her high position. She knew Latin perfectly and could read the writings of the Gathers of the Church in that language. She was, however, no less capable in accomplishments that are peculiarly feminine. With consummate artistry she embroidered vestments for divine services, and took great pleasure in working for the poor and the sick.

The princess loved and honored her saintly brother Louis, who was her senior by ten years and had then been king for many a year. But her love for God was still greater. One day she was knitting a new-fashioned nightcap. The king asked her to give it to him when finished.

“No,” she said, “this is the first of its kind and I must make it for my Savior Jesus Christ.”

Accordingly, she gave it to a poor sick person, and then made another for the king.

Her life in the royal palace was as retired as that of a nun in her convent. Hardly ever did she speak at mealtime. The choicest food she sent to the sick, and she ate so little even of the ordinary food that it was remarkable how she could live. Blessed Isabella of France fasted three days every week. All the court considered the princess a saint. One of the court ladies, who wrote her life, says,

“We beheld in her a mirror of innocence, and at the same time an admirable model of penance, a lily of purity, a fragrant rose of patience and self-renunciation, and endless fountain of goodness and mercy.”

Isabella’s only desire was to belong entirely to God, and so she took the vow of perpetual virginity. However, Emperor Frederick II sought her consent for marriage with his eldest son Conrad. Her mother, her brother, the king, and even Pope Innocent IV would have liked to see the marriage take place for the good of the State and the Church. But Isabella wrote the Holy Father a letter in which she expressed such high regard for consecrated virginity and so strong a desire to persevere in it, that the pope praised her highly and encouraged Blessed Isabella of France in her noble sentiments.

When her mother died, Isabella wished to withdraw from the court in order to consecrate herself entirely to God in a convent. With the king’s assistance she built a convent for the Poor Clares at Longchamps near Paris, and then with several ladies of the court she obtained admission. At the request of the Holy Father, the strict rule of St Clare was mitigated for this community by St Bonaventure, who was minister general of the Franciscan Order at that time, and the modified rule was confirmed anew by Pope Urban IV.

At Isabella’s request, the convent was named for the Humility of Our Blessed Lady. Blessed Isabella of France lived there nine years and desired nothing more than to be a humble subject although she surpassed everyone in sanctity. At her death in 1270 angels were heard singing. Several miracles occurred also after her death, and so Pope Leo X beatified her.