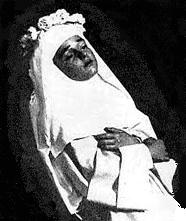 
Blessed Imelda offers a charming study in child sanctity. It was on the occasion of her fifth birthday that Imelda asked her pious parents if she also could receive communion. She already possessed a love of Christ, but she was far too young. With an understanding of what communion really means, she wondered aloud:

“Tell me, can anyone receive Jesus into his heart and not die?”

At the early age of nine she entered the Dominican convent near Bologna. The one great desire of her life in those days was to receive within her breast her sacramental God. Custom had established the age of twelve as the proper time for little ones to receive First Holy Communion, and the convent chaplain would not listen to a suggested deviation from this rule. Frequently did the child beseech her confessor for permission to approach the divine banquet table, only to be repulsed.

On May the 12th, 1333, the vigil of the Ascension, the community partook of the Eucharist in a body, leaving Imelda alone in her choir stall. Her frail body shook with emotion, tears flowed down her babe-like face, and with a voice that trembled with grief she asked to be fed upon the Body of her Lord. No attention was paid to her. The Mass came to a close. The religious left the choir. But Imelda remained behind uncomforted.

Suddenly a sweet fragrance, as of roses, filled the air and was seemingly wafted throughout the monastery. The nuns, tracing its source, returned to the chapel, and there, to their astonishment, beheld a Sacred Host suspended in the air above the head of the weeping maiden. The priest who had just celebrated Mass came, paten in hand, and, with holy impatience, awaited developments. The Host slowly descended, rested on the paten, and from the hands of the chaplain Imelda received her Eucharistic God. 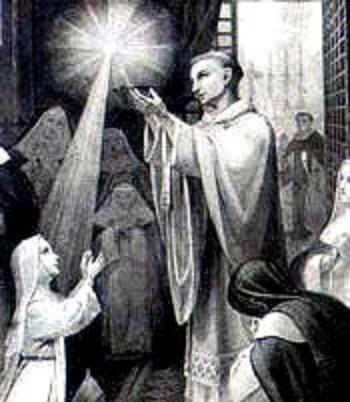 The transport of love which took possession of her little heart at this longed-for moment was too great for a finite being.

Imelda died in the state of ecstasy in sheer joy and made her thanksgiving for First Holy Communion among the angels in Heaven.

The cultus of this young Blessed has grown so popular that a confraternity for First Communicants has been established in her honor, and the last Eucharistic Congress held in Bergamo passed a resolution petitioning for her solemn canonization. Her incorrupt body can be seen in the Church of San Sigismondo in Bologna.