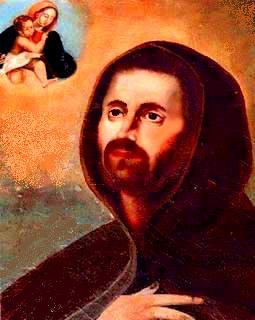 Calabria was the birthplace of Blessed Humilis; the year was 1582. In baptism he received the name of Luke Anthony, and at a very early age he gave evidence of great love of God and holy things. His parents spared no efforts to give their boy a good training. He obeyed not only their commands but even their least wishes. The noisy games of his associated held no attraction for him; he found his delight in prayer and in going to church. His confessor was aware of the special gifts God was granting to the boy, and permitted him, at a very early age, to receive Holy Communion frequently.

As a young man, he spent the time he could spare from his heavy duties in the fields and with the flocks by meditating on the sufferings of our Savior before a crucifix. At eighteen, when it was necessary to choose a vocation, Luke Anthony began to pray fervently for light. He joyfully came to the conclusion that he was called to be a lay brother in the Franciscan Order.

A cross awaited him at the start, however. Obstacles presented themselves, and the fulfillment of his cherished desire had to be postponed for quite a time. He did not, however, lose courage, but began to lead a life like that of a strict and zealous religious. Nine years passed by before the hindrances were removed. He was now admitted as a lay brother at Bisignano, and received the name that fitted him so well, Brother Humilis, that is, the humble one.

Blessed Humilis of Bisignano was a model to this brethren. A devoted client of the Immaculate Virgin, he obtained from her through much prayer and mortification the virtue of purity to such a degree that he seemed to be an angel in the flesh. But his love of poverty and humility were just as great. He dreaded all honor or distinction accorded to him, and publically acknowledged himself to be the greatest sinner. But our Lord, who exalts the humble and gives wisdom to the simple, gave supernatural light to Humilis, so that learned men came to him for advice and instruction in their problems. Pope Gregory XV had him come to Rome, and always received him with special kindness. Urban VIII also appreciated him highly and often discussed matters with him.

Illness finally forced Humilis to return to his convent at Bisignano for medical attention. But his life was drawing to a close. He suffered severe pains with dauntless patience until the moment of his death. Crucifix in hand, he fixed his eyes intently on it and entered into celestial joy on November 16, 1637. The remarkable favors which God granted Blessed Humilis of Bisignano in life and after his death were carefully examined by Pope Pius IX and approved as miraculous. Pope Leo XIII enrolled his name among the blessed.