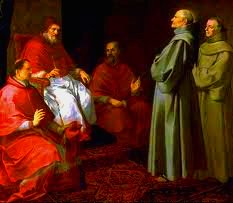 
Two companions from Assisi had already joined St Francis when Giles, a well-to-do young man of the town, heard that young men were joining St Francis. Blessed Giles of Assisi repaired to the poor hermitage yard by Assisi, which the three occupied.

Prostrate upon his knees, Blessed Giles begged St Francis to accept him into his company. Francis presented him to the other two, saying: "See here a good brother whom almighty God has sent us." This was on April 23, 1209. On the same day, both went to Assisi, where Giles begged in God's name for a bit of cloth to make a habit. Blessed Giles of Assisi divided his entire fortune among the poor.

Blessed Giles of Assisi was plain and simple in mind, of a mild temperament, but also full of power and energy when it served to accomplish anything good.

Recognizing humility as the necessary foundation for perfection, Giles sought humiliation and contempt, but fled from honors. Once when Blessed Giles of Assisi was passing through the March of Ancona with the holy Founder and at some places special honor was shown to them, he said, "O my Father, I fear we shall lose the true honor if we are honored by men."

Blessed Giles of Assisi entertained a great desire to make a pilgrimage to the Holy Places, and since Francis knew that he did much good everywhere by his holy example, he gladly granted his desire. Giles visited the tomb of the Apostle James at Compostela in Spain, and then went to the Holy Places of the Passion of Christ in Jerusalem. He also visited the sanctuary of the holy Archangel Michael on Mt. Gargano in Italy, and the town of Bari, there to honor St. Nicholas.

His whole appearance preached poverty, humility, and piety. He also utilized every opportunity to encourage penance and love of God. He endeavored to earn his livelihood mainly through manual work; whatever he obtained over and above his immediate needs, he at once gave to the poor; if he lacked necessities, he begged them for God's sake. Once a poor woman who was dressed in the barest necessaries asked Brother Giles for an alms. As he had nothing to offer her, he compassionately took off his capuche and gave it to her.

In the year 1219, at the great chapter of 5,000 brothers, St. Francis commissioned Giles to go to Africa with several companions, to preach the gospel to the Mohammedans. But they did not achieve their purpose. As soon as they landed in Africa, the Christians there, who feared a general persecution, led them by force to another ship which brought them back to Italy. At this time Brother Giles was sent to the quiet convent of Perugia, which remained his abode until his death. He lived practically only for God. Even at his work, thoughts of the last judgment, of eternity, and of the glory of heaven constantly occupied his mind.

Once when two distinguished gentlemen asked him to pray for them, he said: "Oh you do not need my prayers." "Why not?" they asked. Blessed Giles of Assisi answered, "You live among all the comforts of the world and still believe that you will get to heaven; but I, a poor human being, spend my days in labor and penance, and yet I fear I will be damned."

When he reflected on the joys of heaven, Blessed Giles of Assisi was beside himself with longing. Often when the children in the street called out to him the mere word "paradise," he was rapt in ecstasy.

Pope Gregory IX had heard of the contemplative gift of Brother Giles, and being just then in the neighborhood of Perugia, he sent for him. When the pope began to speak to Giles about divine and heavenly matters, Giles at once went into an ecstasy. When he came to again, he humbly begged the Holy Father's forgiveness -- it was his weakness, he said, that he was immediately beside himself. The pope required that he give him some good advice for the administration of his burdensome duties.

Quite confounded, Giles excused himself saying that he could not advise the head of the Church. But when the pope commanded him in obedience, he said, "Holy Father, you must have two eyes in your soul. The right eye must be kept on heavenly things; the left one, on the things of this earth, which you must regulate."

St Bonaventure considered himself fortunate to have lived at the time when he could still see and speak with Brother Giles. When he came to Perugia as provincial of the order, Giles said to him one day," My Father, God has accorded you great kindness, since you are so learned and can, therefore, serve God so perfectly; but we unlearned ones, how shall we correspond to the goodness of God and arrive at heaven?"

The learned general of the order answered him: "My brother, in order to get to heaven, it suffices that one love God, and a poor unlearned woman can love God as well as, maybe even better than, a great theologian."

Thereupon Giles ran out into the garden that led to the street, and filled with joy, cried aloud, "Come, ye simple and unlearned men, and ye poor women! You can love God as well as, and perhaps even more than, Brother Bonaventure and the greatest theologians."

Finally, pure as a lily, the soul of Brother Giles went to the vision of things divine, which he had so often contemplated. He died on April 22, 1262, on the anniversary of his entrance into the order, to which he had belonged for 53 years. His grave in the Franciscan church at Perugia is highly venerated. Pope Pius VI sanctioned the veneration accorded Blessed Giles of Assisi from time immemorial.