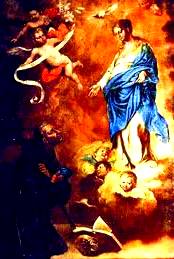 Gerard was born in Valencia near the River Po, and belonged to the noble family of the Cagnoli. For fourteen years his mother lay ill, and during all this time Gerard waited on her with the tender devotion of a loving son. After her death he distributed his inheritance among the poor, and, impelled by motives of piety, he set out to visit the more notable shrines of Italy. Then going on to Sicily, he chose for himself a cell at the foot of Mt Etna, where he planned to live in perfect seclusion and to devote himself entirely to God and to the salvation of his soul. It was Christian prudence on the part of Blessed Gerard to renounce all his possessions, all honors and pleasures, to live apart from the world and devote himself to those matters which pertain to heaven and to eternity.

Moved, however, by the fame of the virtue and miracles of St Louis the bishop, who was a Franciscan, he hastened to obtain admission into the Franciscan Order. From Randazzo, where he had been invested, he was transferred to Palermo. Here he took great delight in performing the humblest duties. As a cook, and later on as porter, he gained the esteem of his confreres, as well as of the people, by his conscientiousness, his spirit of prayer, and his charity towards others, especially towards the poor and needy.

God almighty favored Blessed Gerard Cagnoli with the gift of prophecy and other graces. After the Blessed Virgin acquainted him with the time of his death, he peacefully surrendered his soul to Him to whom he had dedicated all his thoughts and affections. Gerard died in the year 1342 at the age of seventy-five. His body rests in the church of St Francis at Palermo.

Pope Pius X ratified the veneration paid to Blessed Gerard Cagnoli from time immemorial, placing his name among the Blessed of the Church.

Grant, we beseech Thee, O almighty God, that spurred on to a better life by the example of Blessed Gerard, Thy confessor, we may be led to imitate the life of him whose festival we commemorate. Through Christ our Lord. Amen.