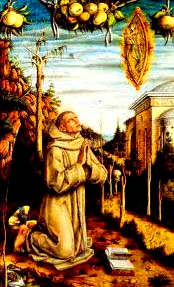 Gabriel was born in 1385 and belonged to the ancient ducal family of the Ferretti. His devout parents raised him in the fear of God, and in his eighteenth year he entered the Franciscan Order. His efforts at acquiring virtue won for him so great a degree of the respect and confidence of his brethren that, shortly after his ordination to the priesthood, when he was only twenty-five years old, he was appointed to preach missions in the March of Ancona. For fifteen years he devoted himself to this important task with blessed success.

He was then assigned to the office of guardian of the convent of Ancona, and later he was elected provincial of the province of the March. In both offices he was careful to guide his subjects well. He shirked no labor, and he could be very severe if it was necessary to correct an evil. He achieved the greatest results, however, by his own bright example of virtue, which induced weak and lax characters to exert themselves manfully in observing the rule.

The following incident is proof of his great humility and piety. Once while he was journeying to Assisi, he went into the Franciscan church at Foligno to pray. The sacristan, who took him for a brother, bade him serve the Mass of a priest who had just gone to the altar. The humble provincial obeyed, but when the guardian of the convent recognized the venerable superior of the province of the March in the server, he severely reproached the sacristan. Father Gabriel defended the sacristan, saying:

“To serve Mass is a great privilege. The angels would consider themselves honored. So do not blame the brother for conferring that honor on me!”

Gabriel’s zeal to promote the interests of the order was as great as his humility. At San Severino he restored a convent that had fallen into ruin. At Osimo he built a new convent. The convent at Ancona he enlarged, in order to accommodate the great number of novices attracted to it by the fame of his sanctity.

Blessed Gabriel Ferretti possessed an ardent love of God and the Blessed Virgin Mary, and he unwittingly gave expression to it in all his sermons. Frequently he was favored with vision of Our Lord and of the Blessed Virgin.

Rich in virtue and merits, Blessed Gabriel Ferretti died on November 12, 1456, in the convent at Ancona, assisted in his last hour by the servant of God Gregory of Alba, and St James of the March. The latter delivered his funeral oration. To this day his body is incorrupt, and the many miracles wrought through his intercession have increased the devotion of the faithful to him. Pope Benedict XIV and Pope Clement XIII solemnly confirmed his veneration.