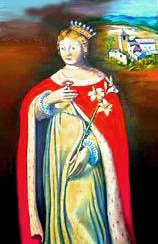 Blessed Delphina was the only daughter of the wealthy Count William of Glandeves in southern France. She lost both parents when she was seven years old, but the little orphan was received into a convent school where an aunt of hers was abbess. There she received an excellent education in the fear of the Lord and in everything pertaining to her eminent rank.

Delphina had already consecrated herself to God by the vow of virginity, when King Charles II chose her as Elzear’s bride. Filled with consternation, Delphina had recourse to the Blessed Virgin, to whose motherly care she had entrusted herself. Our Lady appeared to her and calmed her fears. Delpina then consented to the marriage, which took place with great solemnity in the presence of the king and of the archbishop of Aix. The holy innocence of his spouse filled Elzear with such love of holy purity that he made a vow to act only as the protector of her virginity, and he was faithful to this pledge all his life. They lived together like two angels, the one ever encouraging the other in more ardent love of God.

Delphina devoted herself to the care of her household. The servants, whom she had to retain because of her high rank, she instructed in piety and the fear of God. She took great personal interest in them all, loving them as if they were her children. They in turn loved and honored her as their mother, young as she was.

Elzear died on an errand to Paris in the interests of the king. Delphina wept bitterly when she heard the news. Nevertheless she prayed:

“My God, may Thy most holy will be done!”

Urged by the spirit of God toward still greater perfection, Blessed Delphina of Glandeves presently renounced all temporal goods and added to her vow of chastity the vow of holy poverty.

The fame of Delphina’s holy life induced Queen Eleonore of Sicily to appoint her mistress of the royal household. Delphona so transformed the easy morals of the court that the palace seemed changed into a sanctuary. She lived many years yet, edifying the nobility by the brilliant example of her virtue.

Blessed Delphina of Glandeves died a saintly death in 1358 at the age of seventy-four. Her tomb is next to that of her husband in the city of Apt in southern France. Numerous miracles increased the veneration paid to her and pope Urban V solemnly approved this veneration.