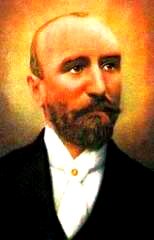 The city of Milan has abounded in men of learning and virtue. Our present age has revealed a new star there, which is destined to show an amazed modern generation that profound learning and humble faith can well go hand in hand.

Blessed Contardo Ferrini was born of a distinguished family on April 4, 1859. When he was still a student in high school and college he encouraged his companions to lead good lives and exercised a kind of lay apostolate among them. After winning his doctorate in law, he obtained a government scholarship to study abroad. He went to Berlin, where he studied Roman-Byzantine law, a field in which he achieved international fame.

In the capital of the German empire prejudices against Catholics did not keep Professor Ferrini from publicly professing his faith. On returning to Italy, he taught in various higher institutions of learning and eventually at the University of Paris.

It must be stressed here that Ferrini's life was practically an unbroken elevation of his soul to God. His keen intellectual ways penetrated to the Last Principle of all things.

"Our life," he said, "must reach out towards the Infinite, and from that source we must draw whatever we can expect of merit and dignity."

Every day he approached the Holy Table. He made a short meditation daily, and also read from Thomas a Kempis. His favorite books were those of the Bible. The better to savor the spirit of their contents, he read them in the original languages, of which he had a perfect command.

Like another Joseph of Egypt, he preserved his purity unsullied amid the dangers of big city life. He practiced many and varied mortifications to arm himself against harm.

In 1886 Blessed Contardo Ferrini joined the Third Order of St Francis, and for the rest of his life he faithfully observed its rule. He also enrolled himself in the St, Vincent de Paul Society. In his speeches and writings as well as in his conduct, he made it a point to show that faith and science are not only not opposed to each other, but that faith is rather a shield to protect us from error and guide us to true heights.

In 1900 Contardo Ferrini was afflicted with a heart lesion in consequence of excessive labor. In the autumn of 1902, feeling the need of rest, he repaired to his country house at Suna. There, however, he was stricken with typhus. Due to his weakened condition, he was unable to resist the malignant fever, and died on October 17, 1902, at the age of 43.

The high esteem in which the deceased was held now became evident. Letters of condolence from the professors of the university praised him as a saint. The people of Suna promptly expressed a desire to see him numbered among the saints. The demand for his beatification grew more insistent with time, and there was universal rejoicing when in 1909 Pope St. Pius X appointed Cardinal Ferrari to begin the process.

Pope Pius XI conferred on Blessed Contardo Ferrini the title Venerable in 1931; and Pope Pius XII beatified him in 1947.