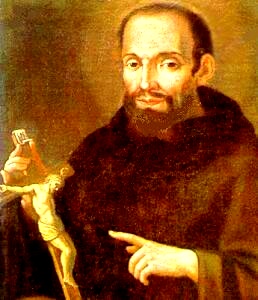 Bonaventure was born of poor but virtuous parents in Potenza in the kingdom of Naples. A pious priest gave the boy instructions in Latin. At the age of 15, Bonaventure received the Franciscan habit among the Conventuals. After his profession, he resumed his studies with great ardor, but his zeal for perfection was less ardent.

His superiors sent him to Amalfi, where he lived eight years under the guidance of an eminent director of souls. This spiritual director trained his pupil above all in humility, self abnegation, and obedience, and Bonaventure achieved a high degree of perfection in these virtues.

One day Blessed Bonaventure of Potenza told his master that the key to the sacristy was lost.

"Well," said his master with a smile, "then you will have to look for it in the well; get a rod and fish it out."

Promptly Bonaventure went to the well and with rod and line fished for the key. It was not long before he actually drew it out. God rewarded him in a miraculous manner for his blind obedience.

As a priest Blessed Bonaventure of Potenza labored with remarkable success. His words, conduct, prayer, and mortification combined to produce blessed results. His simple sermons made a deep impression on all hearts. At times a single word of his was enough to move the most hardened sinner to contrition.

At various times he was appointed guardian of a convent, but his humble pleas were always successful in changing the mind of his superiors. Obedience at length compelled him to accept the position of novice master. In this office he sought to inculcate in his pupils above all the practice of humility and obedience.

An epidemic broke out among the townsfolk, and Bonaventure at once sacrificed himself. Fearless of contracting the disease, he hastened from end to end of the town, rendering every possible service to the stricken, even the lowliest, and administering the sacraments to them. He cured many miraculously; he multiplied their insufficient provisions by his blessing, and he foretold future events.

After Bonaventure had been a shining model of virtue among his brethren for 45 years, he felt that his last hour was at hand. While the community gathered about his bed during the administration of the last sacraments, the dying man in touching words begged pardon of his superior and the community for his many faults and infractions of the rule, as he called them.

Deeply moved, the superior handed him the crucifix, and amid abundant tears the servant of God kissed the feet of the Savior, and then died peacefully on October 26, 1711.