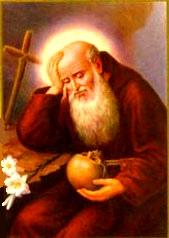 Blessed Bernard of Offida was the son of simple peasant folk. The family lived in the neighborhood of the little Italian town of Offida and were highly esteemed for their honesty and piety.

There were seven children in the family, but Bernard proved to be a special joy to his mother, who often held him up as a model to the other children. The little lad, however, so loved his brothers and sisters that, if anyone of them had committed a fault, he would go and ask forgiveness for him and offer to take the punishment.

As he advanced in age his vocation to a higher life manifested itself quite distinctly. Everything attracted him to God. When he tended the cattle, he often took out a holy picture, which he constantly carried with him, posted it in some quiet spot, and then knelt down to pray before it. He would then command his flock not to stray from the pasture, and they obeyed his command.

On Sundays Bernard would sometimes remain in church until evening without any food whatsoever. Although he was very useful to his father, still, the latter perceived that he was not destined for the world. He therefore suggested to his son to make choice of a convent that he would like to enter.

Blessed Bernard of Offida joyfully repaired to the convent of the Capuchins, where he was admitted as a lay brother. He lived in various convents of the order, but always in so simple and unobtrusive a way that nothing special is recorded of him before he was sixty years old. At this age he was a sent to his native town, where he was charged with gathering the alms for the brethren, and at a later time, with the duties of porter. It was not long before it was observed that the simple brother was a real saint.

Blessed Bernard of Offida always went on his way as though he were walking in the actual presence of God. Even for the smallest alms that was offered to him he never failed to express a heartfelt thank you. He never accepted anything for himself personally, and took care never to receive anything that was superfluous. For the temporal alms he received, he returned spiritual alms of far greater value. He was so often instrumental in conciliating persons who were at variance with each other that he was called “the angel of peace.”

Once a man intended to tell him what he was suffering because of discord between his mother and his wife. But before he began, Bernard said to him: “Listen, your mother is a cross for you wife, and your mother and your wife together are a cross for you; bear it patiently!” These few words produced perfect peace in the soul of the man and gave him strength to carry his cross.

Sometimes Bernard was divinely enlightened to know the sad state of certain great sinners; he would then disclose to them the great danger to which their souls were exposed and in almost every case they were sincerely converted. Two bishops testified that Brother Bernard had done more good in their dioceses than prominent preachers and missionaries. But Bernard always held priests in high esteem. He would say to the faithful: “When you see priests, you should kiss the ground on which they walk, for it is they who administer the sacraments to us and thereby raise us to the state of grace; the salvation of our souls is in great measure dependent upon them.”

He frequently recommended devotion to the Blessed Virgin by means of the Holy Rosary. “Believe me,” he would say, “by means of the rosary Mary is in a special way the dispenser of graces.” When Brother Bernard was eighty yeas old, he was relieved of all duties. Still he continued to be active for the poor and his dear sick people. But he was no less solicitous to observe poverty. He could not bear to see anything go to waste. He would say: “Let us remember that whatever we do not need, Christ’s poor do need.”

Blessed Bernard of Offida died when he was ninety years old, in the year 1694. His reputation for sanctity was confirmed by miracles; and Pope Pius VI beatified him.