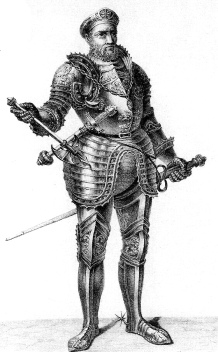 That it is possible to serve God unreservedly in every walk of life, even as a young prince, soldier, and diplomat, is demonstrated by the holy life of the fifteenth-century Tertiary, Margrave Bernard of Baden. Born in 1428, Bernard was the second son of Margrave Jacob I of Baden. Though he spent most of his boyhood at the courts of Charles VII of France and Rene of Anjou, he grew up to be an exceptionally pious young man. When the king of France made him an offer of marriage with his daughter Princess Magdalen, Bernard refused because he had vowed to live in perpetual chastity.

After the death of his father in 1453, twenty-five year old Bernard left the government of Baden in the hands of his brother and entered the service of Emperor Frederick III as a military officer and ambassador. A Franciscan Father by the name of Friar John, who had received him into the Third Order, henceforth accompanied him as chaplain on all his journeys. So well did Bernard carry out his duties that the emperor entrusted him with many delicate diplomatic missions, principally in regard to the crusade against the Turks.

Constant contact with worldly affairs, however, did not prevent him from leading the life of a saint. Even at the gay court of Vienna this unusual young diplomat was held in high esteem because of his exemplary and pious life. While others sought relaxation in worldly amusements, he spent hours in prayer. Twice a week at least he received Holy Communion. At the time, that was a very unusual practice.

Traveling from Genoa to France in behalf of the crusade, he took sick near Turin, and died in the Franciscan friary at Moncalieri on July 15, 1458, only thirty years old. The people began at once to venerate him as a saint, and miracles took place at his tomb. His body was taken back to Baden and laid to rest in the parish church. In 1481 and again in 1769 the Chruch approved his cult as Blessed; and the Grand Duchy of Baden honored him as its second patron.