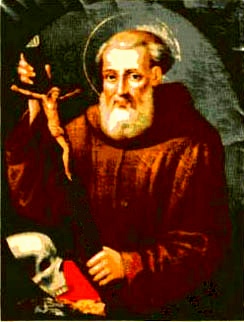 While St Leonard of Port Maurice was bringing about a remarkable change of morals in northern and central Italy, Blessed Angelo was equally successful in southern Italy among the peasant population of the province of Calabria.

Born in the little town of Acri, and having spent his youthful years in perfect innocence, Blessed Angelo of Acri entered the Capuchin convent, but he did not persevere. This rigorous life frightened him and he returned home. He asked to be re-admitted and his request was granted, but again he weakened and left the convent. Unable to find peace, he made a third attempt, and was again permitted to enter. When the enemy of souls tried anew to shake his resolution, he cast himself upon his knees before a crucifix and cried out: “O Lord, I cannot trust myself. You know my weakness. Assist me with Your grace!”

God gave him special graces and he came forth victorious from the struggle. He now resolved to consecrate each hour of the day to some special mystery of the Passion of Christ. This furnished him with such strength and joy in his vocation that henceforth everything seemed easy.

As a priest his fervor at Holy Mass was sometimes so great that he was rapt in ecstasy and would spend a long time in thanksgiving, crying out with our holy Father St Francis: “O Love that is not loved! O Love, O Love!”

Ordered to prepare himself to preach missions, Angelo did so with the greatest care. He was to begin his mission career with the Lenten sermons at Carigliano in 1702. He began by addressing the large congregation with much zeal, but he had not advanced far when his memory failed him. He stopped short and had to leave the pulpit in confusion.

Returning to his cell, Blessed Angelo of Acri cast himself on his knees, acknowledged his shortcomings, and pleaded with God to make His will known to him. Then he heard a voice saying: “Fear nothing, I will grant you the gift of preaching.” Angelus asked: “Who are you?” At that moment his cell shook and he heard the words: “I Am who Am. In future you will preach in a familiar and simple style, so that all may understand your words.”

Now Angelo understood what God wanted of him. He resolved at once to drop that artificial style of preaching which depends for its success on personal effort, and to prepare more by prayer and meditation, trusting in the help of God. The results were proof that God was working through him. In future Blessed Angelo of Acri spoke with such clarity, power, and heavenly unction that his hearers were deeply moved.

Father Angelo did untold good as he traveled from parish to parish, but once again a great humiliation awaited him. It was in Naples, where the cardinal-archbishop had urged him to preach. There were some who jeered and laughed at him because of his simple language. But when Angelo called upon the congregation at the next sermon to pray for an unfortunate soul that was going to meet with a sudden death, and the principal scoffer presently dropped death while leaving the church, the people recognized that they had mocked a saint. Now they listened to his lessons as to one sent by God, and God Himself confirmed his words by many miracles. Blessed Angelo also received the grace to read the hearts of men, so that he disclosed to them the sins they concealed or forgot in confession. 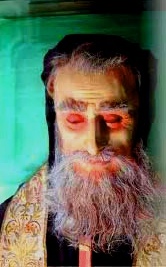 After laboring untiringly in the vineyard of the Lord for more than thirty-six years, Blessed Angelo of Acri died, worn out by work but rich in heavenly merits, on October 30, 1739. The many miracles that occurred even after his death induced Pope Leo XII to beatify him in the year 1825. The Franciscans and the Capuchins celebrate the feast of Blessed Angelo on October thiertieth.