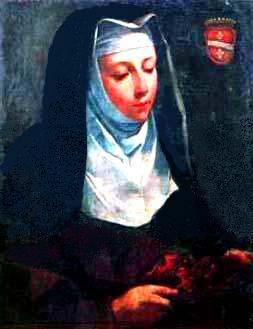 Blessed Angelina of Marciano was born in 1374 in the palace of her father, the duke of Marsciano, near Orvieto in the Papal States. Her devout mother was much pleased to note how the conduct of her child corresponded with the name she bore, little angel.

The first words Blessed Angelina of Marciano uttered were the holy names of Jesus and Mary. She delighted in building little altars, which she decorated tastefully, and around which she would gather other girls of her age to pray and sing.

Blessed Angelina lost her mother when she was but 12 years of age. Her attachment to Jesus Christ then became more intimate and she vowed perpetual chastity. Blessed Angelina had scarcely reached the age of 15 when her more worldly-minded father told her that he wanted her to marry the duke of Civitella. Angelina declared that she wished no other than her heavenly Bridegroom, Jesus Christ.

The duke was filled with rage at her opposition. He gave her one week to decide, threatening to dispatch her with his sword if she persevered in her refusal. Angelina increased her prayers and penitential austerities, pleading with her Lord Jesus Christ, with the Blessed Virgin, St Joseph, and the virgin disciple St John to help her preserve the virginity she had vowed.

In answer to her prayers, an interior voice prompted Blessed Angelina to yield to her father's wishes and assured her that God would not forsake her. Angelina's husband turned out to be a devout Christian, and, heeding her expostulations as well as her wishes, consented to live with her in perfect continence.

Two years after their marriage her husband died, and the young widow now devoted herself entirely to works of piety and charity. Together with several young women of the vicinity she entered the Third Order of St. Francis, and with them she undertook to care for the sick, the poor, the widows and orphans, and endeavored to win sinners back to the path of righteousness.

Blessed Angelina possessed the special gift of awakening in others a love for virginity. Many young women from some of the most distinguished families among the nobility, following her example, left their families and entered various convents. This aroused the ill-will of many people, and Angelina was severely criticized. Some even accused her of being a heretic and a disturber of the peace, saying that she condemned the married state and was disrupting the foremost families of the land. For this reason she was accused before the king of Naples.

The king invited the young duchess to appear before him. Angelina, having received from God knowledge of the king's intentions, appeared before him and his court carrying burning coals in the folds of her cloak. She exposed the king's secret intention of having her burned as a heretic, and disturber of the peace, showed how the coals she had brought had not injured her in any way, and declared herself ready to die upon the coals if it could be proved that she was guilty of the crimes with which she was charged. She attested that she had never condemned the married state, but that she had given due praise to the state of virginity.

Struck by the miracle as well as by the words she uttered, the king dismissed Angelina with great respect. A few days later Blessed Angelina raised to life a young man, scion of one of the most prominent families. As a result, she was showered with honors from every quarter of the city.

In order to elude them, Blessed Angelina went into seclusion in her palace. Even so, several young women of prominent families found their way to her there, and she was again accused before the king, who now banished her and her companions from the kingdom.

The little congregation praised God for the persecution that the world was heaping on it, and then repaired to Assisi. There Angelina was instructed in a ecstasy to go to Foligno, where God would take care of her. In this city she was cordially received by the inhabitants, who evinced great willingness to help build a convent for her and her companions.

It was there that Blessed Angelina established a community whose members took solemn vows and lived according to the rule of the Third Order. The Apostolic See sanctioned this sisterhood of the Third Order Regular, and confirmed the election of Angelina as the first superioress although she was then only 20 years old. Later Angelina founded 15 other convents of the same type in various towns of Italy, and Pope Martin V appointed her abbess general in the year 1428. This office she administered until her death on July 14, 1435.

When Blessed Angelina of Marsciano realized that her death was close at hand, she expressed the wish to make a general confession. She received the last sacraments with great devotion, and assembled her spiritual daughters about her for the last time. She admonished them always to remain faithful in observance of the rule and gave them her blessing. She was them rapt in ecstasy, during which this faithful bride of Christ was admitted to the eternal joys of Paradise.

Pope Leo XII in 1825 confirmed the devotion paid to her from time immemorial.