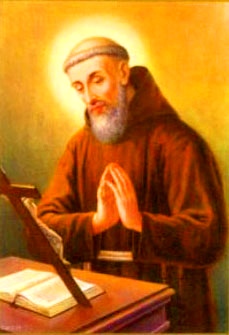 Benedict was born of the noble family of the Passionei at Urbino, Italy, in 1560. His birthplace was the so-called palace of Urbino, which has since been converted into an orphanage. Indeed, the change happened soon after Benedict’s birth; for, ruthless death, which respects a palace as little as it does a hovel, made an orphan of Benedict already in his seventh year.

At the deathbed of his mother, the pious boy recommended himself to the motherly protection of Mary, just as St Teresa did, and Mary always remained a loving and protecting mother to him throughout his life.

While Benedict was pursuing his studies at the universities of Perugia and Padua, everybody admired his habits of modest reserve and piety. In his studies he sought God alone. Often the pious student prayed:

“Grant me, O Lord, that knowledge which will teach me to know Thee. But grant me above all the grace to love Thee; because I desire to know Thee only that I may love Thee.”

Scarcely twenty-two years of age, he obtained his degree of Doctor of Laws amid the acclamation of his professors and the rejoicing of his relatives, who believed that he would shed fresh luster on the family name.

On completing his studies, Blessed Benedict of Urbino went to Rome to being his career in the household of a cardinal. But high prelacies did not appeal to the heart of Benedict. He retired to his native place, where, after putting his vocation to several tests, he begged for admittance among the Capuchins.

On the first of May, 1584, Blessed Benedict of Urbino received the habit of St Francis in the novitiate at Fano. With joy and great ease he undertook all the exercises, even the most humiliating. But his weak constitution, which at his admission had caused some misgivings, appeared to necessitate his leaving the convent. His dismissal had already been decided upon when Benedict pleaded so urgently with his heavenly Mother Mary that his health was miraculously improved. At a later date he could even be sent out on missions.

As a missionary priest, Blessed Benedict of Urbino was associated with the great Capuchin apostle, St Lawrence of Brindisi, in a campaign against the heretics of the sixteenth century in Germany and Bohemia. A few years later he returned to Italy and was also active there as a zealous apostle of the truth against falsehood, vice, and ungodliness. His edifying life of poverty and austere penance gave his words invincible power over the hearts of men. But with all his success he remained so humble that his associates marveled. Even the smallest fault that happened to him in choir or at other exercises, he humbly acknowledged before the community. When anybody objected that that was a practice for novices, he would answer:

“Well, I am still a novice in virtue.”

Benedict practiced poverty to an extreme degree. He would have nothing but the most necessary furniture in his cell. Whatever books he consulted, he promptly returned to the library. He wrote his sermons on the blank spaces of letters and envelopes.

Repeatedly Blessed Benedict of Urbino had often to fill the office of superior, and as such he stressed the observance of holy poverty and fidelity in little things, realizing that perfection is achieved more through little things than through great things. He practiced such severe mortification that his life can be termed one continuous fast. The most uncomfortable cell pleased him the most. Often he slept only three hours and passed the remaining time in prayer.

God Almighty glorified His servant by many miracles in life and after death. Benedict died in 1625, after serving God forty years in the religious state. With great solemnity Pope Pius IX pronounced him blessed on February 10, 1867.