Basilica of Our Lady Help of Christians 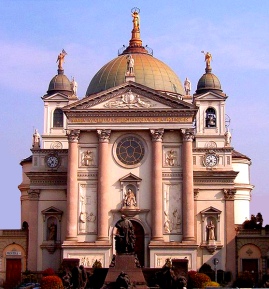 October 27: Dedication of the Basilica of Our Lady Help of Christians, Turin, Italy, built by St. John Bosco (1868)

The vast and magnificent basilica of Our Lady in Turin, Italy, built by Saint John Bosco between 1863 and 1868, was inspired by a dream-vision which he had in October 1844. The Blessed Virgin showed Don Bosco a vast and lofty church and said:

“This is my house; from it my glory shines forth. You will understand everything when, with your material eyes, you will see in actual fact what you now see with the eyes of your mind.”

Nineteen years later, Don Bosco finally set to work on the basilica of Our Lady Help of Christians. Our Lady, in a second vision, chose the location as that of the place of the martyrdom of Saint Adventer Solutor and Saint Octavious, who were both soldiers under the Emperor Maximianus in the fourth century.

When the foundation of the church was laid, Don Bosco went to the contractor, Charles Buzzetti, and told him:

“I want to pay you at once for this fine work. I don’t know if it will be much, but this is all I have.”

He then took out his little purse and emptied the contents into the hand of the contractor, who was expecting a handful of gold coins. His jaw dropped in dismay when he saw in his hand only eight pennies.

Basilica of Our Lady Help of Christians

“Don’t be alarmed,” Don Bosco quickly added with a smile, “the Madonna will see to the payment of her church. I am just the instrument, the cashier.” And to those standing by he concluded, “You will see!”

“The whole church was put up by means of graces granted by Mary,” Don Bosco often said. One sixth of the cost, about one million lire in those days, was borne by the generous contributors, devout persons; the rest came from the small offering of those who had been aided by Mary either in health, in business, in family matters, or in some other way.

“Every stone, every ornament, represents one of her graces,” insisted Don Bosco. The original contractor, who received the eight cents, later testified that, “The Church was paid for to the last cent.”

Among the monuments of the Church, the most splendid is the painting above the main altar. Our Blessed Lady Help of Christians occupies the central position, and is surrounded by symbols: God the Father, the Holy Spirit, the Apostles and Evangelists. It measures more than 33 yards square, and is bordered with gold.

There was much opposition to the project of building a church dedicated to and in honor of Our Lady Help of Christians, but Don Bosco insisted. It appears he had a supernatural knowledge that the future of his own congregation, and that of the whole world in the not too distant future, depended on the powerful protection of Mary, Help of Christians, just as it had needed and obtained that protection at Lepanto on October 7, 1571, and at Vienna, on September 12, 1683.

Don Bosco won out, and the vast church was consecrated and dedicated on June 9, 1868. The dedication festivities lasted nine days, and on each day a Bishop preached while another took part in the religious ceremonies.

(Basilica of Our Lady Help of Christians)