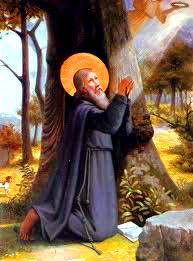 Bartolo Buonpedoni, the last descendant of the ancient and illustrious house of the counts of Mucchio, was born at San Gimignano in northern Italy in 1228. For twenty years his pious mother, who had been childless, begged God to give her a son. St Peter, whose intercession she had invoked, appeared to her in a dream and assured her that her petition would soon be granted. She bore a son, who was given the name Bartholomew, or Bartolo, in baptism. The child grew up in innocence and piety.

When Blessed Bartolo of San Gimignano reached young manhood, he felt that he was called by God to the priesthood. But his father, the count, a proud and worldly-minded man, preferred his son to be a stately knight and famous soldier. He became very angry at his son and used every means to break his resolve.

Matters went so far that the boy fled from the anger of his father to the convent of the Benedictines at Pisa. There he did duty as an infirmarian although still in secular clothes. As his eminent virtues became manifest, the fathers offered him the religious habit. Then one night he was granted a vision. Our Savior, covered with wounds and holding a scourge in His hand, addressed the young man:

“Bartolo, not in this habit are you to attain the celestial crown; it is to be through suffering and wounds, and in the garb of penance.”

Bartolo then resolved to request the habit of the Third Order of St Francis and to embrace the life of a secular priest. After several years of preparation he was ordained by the bishop of Volaterra and appointed assistant priest at Picciola, and twelve years later, pastor of Pichena. In this capacity Blessed Bartolo of San Gimignano labored with extraordinary zeal. All the income of his parish was used for good purposes, especially for works of mercy in behalf of the sick and needy. One night he met a poor traveler, whom he invited to spend the night with him. At midnight he heard a voice say:

“Bartolo, you have given hospitality to Jesus Christ.”

Going to the room where his guest had been lodged, he found that the guest had disappeared.

When Bartolo was fifty-two years old, he was attacked by the dread disease of leprosy, which was so rampant at that time. He resigned his parochial duties, and withdrew to the leper hospital near San Gimignano. He lived there nearly twenty years, gradually wasting away from suffering and leprosy, but always manifesting the most heroic patience. It was a marvelous circumstance that no one ever showed any disgust for his wounds, but rather perceived a sweet odor emanating from them.

A week before his death Our Lord appeared to him, to tell Blessed Bartolo of San Gimignano that the end of his terrible suffering was at hand. He died December 12, 1300. His body was laid to rest in the church of At Augustine at San Gimignano and numerous miracles occurred at his tomb. He was beatified in 1910 by Pope Pius X.