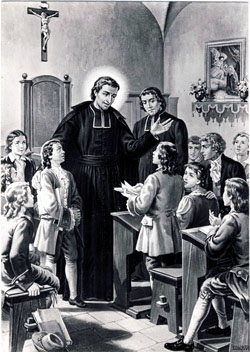 Saint Louis-Marie Grignion de Montfort was born January 31, 1673. He was a Catholic priest, but it was his devotion to the Blessed Virgin Mary and his ‘Total Consecration’ for which he is most famous.

Baptism is recalled as part of the vow of consecration: “I…renew in all sincerity the promises I solemnly made at the time of my holy Baptism.”

The saints see things very differently than most men. In his Consecration to Mary, St. Louis states, “You are truly blessed if the world persecutes you, opposing your plans though they are good, thinking evil of your intentions, calumniating your conduct, and taking away unjustly your reputation or your possessions.”

“My son, beware of complaining to others, rather than to Me, of the bad treatment you receive, and do not seek ways of justifying yourself, particularly when you are the only one to suffer from it.

On the contrary, pray for those who procure for you the blessings of persecution.

Thank Me for treating you as I Myself was treated on earth, a sign of contradiction.

Never be discouraged in your plans because you meet with opposition; it is a pledge of future victory. A good work which is not opposed, which is not marked by the sign of the cross, has no great value before Me and will soon be destroyed.

Regard as your best friends those who persecute you, because they procure for you great merit on earth, and great glory in heaven.

Regard as unfortunate those who live in luxury, who feast sumptuously, who frequent the world of fashion, who make their way in the world, who succeed in business, and who spend their lives in pleasures and amusements.

Never do anything, either good or evil, out of human respect to avoid any blame, insult, mockery, or praise.

When through your own fault some loss or disgrace befalls you, do not be disturbed by it, but rather humble yourself before God and accept it from His hands as punishment for your fault.”

Saint Louis de Montfort had a difficult life in which he was often unjustly persecuted, and where he faced unexpected challenges in his desire to promote love and devotion to the Blessed Virgin Mary. In some ways, and by worldly standards, he often appeared a failure and his motives were misunderstood. Nothing was wasted, for all his work was truly for the glory of God and for the honor of the Mother of God, and his devotion to her has borne great fruit!