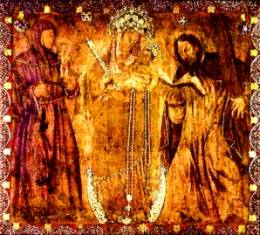 Way up on the Andean Plateau, 150 kilometers to the north of Bogota, Colombia, is the city of Chiquinquira, founded in 1856, and where at the country house of the Spaniard Don Antonio de Santana, a wondrous miracle occurred.

Don Antonio, in 1555, being a devout Christian had an oratory built in his home and requested the Dominican Brother, Fray Andrews Jadraque, to have the image of the Holy Virgin painted. The silversmith and painter, Alonzo de Narvaez did the work. The brother demanded that the Virgin bear a rosary, the official emblem of his order. The cloth had room for two other images at the side, and it was decided to put Saint Anthony of Padua at the right and Saint Andrew the Apostle at the left. The painting was done in tempora, but since the chapel was of straw, the paint faded under the action of the sun, the air, and the rain.

The damage was such that the town priest had it removed from the altar as unworthy for the celebration of Holy Mass. The canvas was taken to Chiquinquira and was used for a rag to dry the wheat under the sun. Seven years later Dona Maria Ramos arrived from Spain and grieved to find the chapel used for animals. Day after day she prayed there that Mary comfort her soul, hopeful that her prayers would be heard. On Friday, December 26, 1586, at 9:00 o’clock in the morning, the canvas was suddenly brightened by the Holy Virgin. Maria was in pious astonishment, almost in a trance, and soon the miracle drew crowds of people.

This wonderful happening was followed by miraculous cures. The Church authorities ordered an investigation to be made of the Virgin of Chiquinquira to verify the truth of the miracle and in the year 1630, the Dominican Brotherhood authorized by the archbishop of Bogota, took charge of the sanctuary, and built a church which was replaced by the present Basilica in 1801. The Holy See, after discussion of the wonderful miracle, granted a liturgical feast day that is celebrated with special services also in some sections of Venezuela and Ecuador as well.

In 1919, by order of the Holy See, the Holy Image was crowned with splendor in Bogota, and in 1944 it was granted the gold scepter and precious jewels as the mother queen of Colombia. The Virgin of Chiquinquira is the comforting heart of Colombia, Venezuela and Ecuador; prelates, magistrates, and other leaders of the nation have knelt down at Mary’s feet and throngs of people, rich and poor, continuously flow to this place to pray for consolation and guidance through this earthly life.

The Rosary Virgin of Chiquinquira

Return to Marian Calendar November from Virgin of Chiquinquira