Victory of the King of France

August 17: Victory of the King of France (Philip the Fair), imploring the help of Our Lady of Chartres (1304)

It was on this day in the year 1304 that Philip the Fair gained a signal victory over the Flemish after recommending himself to Our Lady of Chartres.

The eldest son of King Philip and Isabella of Aragon, he was nicknamed Philip the Fair while yet a prince of his handsome features. He became king of France at only 17 years of age, and married Joan of Navarre in 1284, which enlarged his kingdom.

In the year 1302, Philip sent an inadequate army into Flanders to suppress the Flemish, who were making incursions into his realm at will. His army was soundly defeated at the Battle of the Golden Spurs. Philip responded by winning a naval victory over the Flemish at Zierichzee, and then met the Flemish army at the Battle of Mons-en-Pevele, also known as Mons-en-Puelle, on August 17, 1304.

The battle was furious, lasting all day in extreme heat. Eventually the majority of the French army fled the field, leaving Philip alone with only ten knights fighting desperately to save themselves and their king. Philip’s horse collapsed, having been killed under him, and his life was in great danger of being lost. At that moment, while facing death and certain defeat in battle, Philip turned to the Queen of Heaven, Our Lady of Chartres, begging her assistance to save the day and his life.

Suddenly the French knights who had been fleeing the field turned and saw the king’s royal standard still stood, and that he himself fought like a knight of great renown amidst a sea of raging enemies. Racing to the scene with their swords and lances, they turned the Flemish and drove them from the field in what became a resounding victory of the king of France. The Battle of the Golden Spurs was well compensated. 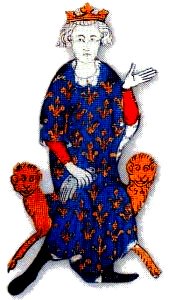 In gratitude for this victory and favor of Our Lady of Chartres, King Philip went at once to do homage to the Virgin Mary at her cathedral. He took off his own armor that he had worn in battle and gave it over to the church at the altar. He also gave to it in perpetuity the land and lordship of Barrus, founded a daily Mass for ever, and left to this church all of the other accoutrements which he had worn on that day of victory. This feast is kept in the Church of Notre Dame, at Paris, on the following day, the 18th, and the office is double. This armor was formerly exhibited in the church on the anniversary of the battle.

Victory of the King of France

*from the writing of the Abbot Orsini and other sources