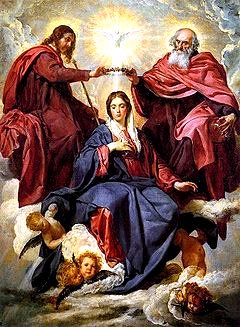 August 18: The Coronation of Our Lady

The idea of the coronation of Mary in Heaven after her Assumption took its rise in an accommodation of the words in the Song of Songs (4:8),

“Come, my bride, from Lebanon..thou shalt be crowned..,” and was chiefly developed and popularized by iconography.

The earliest existing example is probably the mosaic in Santa Maria in Trastevere at Rome, where Our Lady is depicted already crowned, sitting at the right hand of her Son; this dates from about 1140. A century later there appeared what became the usual design, Christ putting a crown upon His Mother’s head.

The theme of the coronation of Mary was popular in English medieval carving, and it was everywhere highly embroidered and developed at the Renaissance. Among more recent artists the subject has aroused little interest, and Catholics today are familiar with it chiefly from the last glorious mystery of the rosary.

Its meaning suggests the final “moment” of the Assumption and the reference in the Apocalypse to “a crown of twelve stars.” It seems to be a second feast of the Assumption, emphasizing the bodily aspect of the mystery.

Saint Mary the crowned is recalled in the verse of a medieval carol:

“After to Heaven He took His flight,

And there He sits with His Father of might,

With Him is crowned that Lady of Light

“Filia Sion, thou art the Flower

Full sweetly shalt thou sit by Me

And bear a crown with Me in tower;

And all mine Saints to thine honor

Shall honor thee, Mother, in my bliss,

That blessed body that bear me in bower—

“After placing the most blessed Mary on this exalted and super-eminent throne, the Lord declared to the courtiers of heaven all the privileges She should enjoy in virtue of this participation in his majesty. The Person of the eternal Father, as the first principle of all things, speaking to the angels and saints, said to them:

“Our Daughter Mary was chosen according to our pleasure from amongst all creatures, the first one to delight Us, and who never fell from the title and position of a true Daughter, such as We had given Her in our divine mind; She has a claim on our dominion, which We shall recognize by crowning Her as the legitimate and peerless Lady and Sovereign.”

“To my true and natural Mother belong all the creatures which were created and redeemed by Me; and of all things over which I am King, She too shall be the legitimate and supreme Queen.”

The Holy Ghost then said:

“Since She is called my beloved and chosen Spouse, She deserves to be crowned as Queen for all eternity.”

"Having thus spoken the three divine Persons placed upon the head of the most blessed Mary a crown of such splendor and value, that the like has been seen neither before nor after by any mere creature. At one and the same time a voice sounded from the throne saying:

“My Beloved, chosen among the creatures, our kingdom is Thine; Thou shalt be the Lady and the Sovereign of the seraphim, of all the ministering spirits, the angels and of the entire universe of creatures. Attend, proceed, and govern prosperously over them, for in our supreme consistory We give Thee power, majesty and sovereignty. Being filled with grace beyond all the rest, Thou hast humiliated Thyself in thy own estimation to the lowest place; receive now the supreme dignity deserved by Thee and, as a participation in our Divinity, the dominion over all the creatures of our Omnipotence.

“From thy royal throne to the center of the earth Thou shalt reign; and by the power We now give Thee Thou shalt subject hell with all its demons and inhabitants. Let all of them fear Thee as the supreme Empress and Mistress of those caverns and dwelling-places of our enemies. In thy hands and at thy pleasure We place the influences and forces of the heavens, the moisture of the clouds, the growths of the earth; and of all of them do Thou distribute according to thy will, and our own will shall be at thy disposal for the execution of thy wishes.

“Thou shalt be the Empress and Mistress of the militant Church, its Protectress, its Advocate, its Mother and Teacher. Thou shalt be the special Patroness of the Catholic countries; and whenever they, or the faithful, or any of the children of Adam call upon Thee from their heart, serve or oblige Thee, Thou shalt relieve and help them in their labors and necessities. Thou shalt be the Friend, the Defender, and the Chieftainess of all the just and of our friends; all of them Thou shalt comfort, console and fill with blessings according to their devotion to Thee. In view of all this We make Thee the Depositary of our riches, the Treasurer of Our goods; We place into thy hands the helps and blessings of Our grace for distribution; nothing do We wish to be given to the world which does not pass through thy hands; and nothing do We deny, which Thou wishest to concede to men. Grace shall be diffused in thy lips for obtaining all that Thou wishest and ordainest in heaven and on earth, and everywhere shall angels and men obey Thee; because whatever is ours shall be thine, just as Thou hast always been ours; and Thou shalt reign with Us forever.”

*from The Woman in Orbit, and The City of God, The Coronation

Return to Roman Catholic Saints Home Page from The Coronation