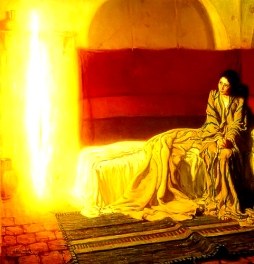 This feast was instituted by the apostles, and is the most ancient of all.

Absorbed in profound contemplation, the humble Virgin of Nazareth, Spouse of Joseph, the Carpenter, was pondering the ills which afflict humanity, at the same time fostering in her heart the most ardent longing for the advent of the Messias promised by the prophets. Suddenly a heavenly messenger presented himself to her. It was the Archangel Gabriel who, bowing with reverence before her, said, “Hail, full of grace, the Lord is with thee.” And the Virgin thought within herself what manner of salutation this might be. Then the Angel went on to explain to her: “Thou hast found grace with God.” “Behold, thou shalt conceive in thy womb and bring forth a Son; and the Lord will give Him the throne of David His Father…and He shall reign over the house of David forever and His Kingdom shall have no end.”

But Mary said to the Angel: “How shall this be done, since I know not man?”

And the angel answering, said to her:

“The Holy Ghost shall come upon thee and the power of the most High shall overshadow thee. And therefore also the Holy One which shall be born of thee shall be called the Son of God…”

The Angel awaited her reply. Then Mary said:

“Behold the Hand-maid of the Lord, be it done unto me according to thy word.”

Fiat – “Be it done” is a mark of desire, not of doubt. Fiat may also be understood as a word of petition, for no one prays unless he believes and hopes to obtain. God wished to be asked. This Mary understood, when she said, “Be it done.”

The human mind will never understand perfectly how much the Incarnation accomplished in Mary at that moment. When she was raised high above all angels and men, she abased herself as much as is possible to a creature. Her greatness was equaled only by her humility. Her blind obedience was the crowning act of her devotedness to God’s will all the years before the Annunciation. It was the manifestation of her interior sanctity and beauty of soul which, as one of the Fathers has said, “ravished the heart of the Son of God and drew Him down to her bosom.” This spiritual conception through faith and obedience was a far greater thing to Mary, we are told, than her conception of Him in the flesh. Mary’s consent to be the Mother of God was given on our behalf, too. This incarnation was a spiritual marriage between the Son of God and our humanity.

The mystery of the Annunciation reminds us of our indebtedness to Mary, as well as of her glories.

This feast of the Annunciation has left its impress on all the arts. Religious and military orders have perpetuated this feast in many ways; the Angelus daily reminds us thrice of it.

We ought to revive interest in a feast as great as this; it is one of the greatest feasts of the year to a world which so badly needs Good News; the Irish call it “Lady Day,” and we simply call it the feast of the Annunciation.

Another controversy occurs regarding the exact date of the feast. although some authors think March 25th was chosen because it is nine months before Christmas, Benedict XIV says March 25 was known by ancient tradition to have been the actual date. St. Augustine in the fourth book of his work on the Trinity also speaks of the ancient tradition. The same day is marked for the Annunciation in the Greek Menologies and Menaea, in the Calendars and Martyrologies of the Syrians and Chaldeans, as well as in the Sacramentary of St. Gregory, and generally in the missals of the West.

*from The Woman in Orbit and Mary's Book of Days

Return to Marian Calendar March from The Annunciation

Return to Roman Catholic Saints Home Page from The Annunciation