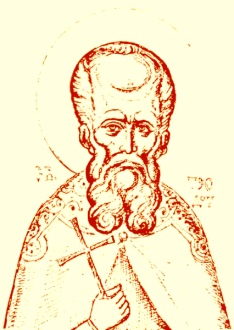 By the example of St Theodotus we are taught the important lesson, that there is no state of life in which a man may not become a saint. He was a citizen of Ancyra, the capital of Galatia, was a married man, and followed the humble calling of an innkeeper. Although his life presented to the eyes of the world nothing extraordinary, it was one of sanctity before God: since having been disciplined in the fear of the Lord from his youth, by a holy virgin called Thecusa, he practiced temperance, chastity, and the mortification of the flesh, by fasting and other penitential works. As he loved poverty, he gave to the poor whatever he could afford; and his inn was the home of the needy, the asylum of the infirm, and a school of Christian piety. He converted many from the practice of a shameful vice and from other crimes, and also brought many, both Jews and Gentiles, to the profession of the true faith, a considerable number of whom arrived at the glory of martyrdom. He had likewise the gift of miracles, particularly that of healing the sick, which he effected by laying his hands upon them, and invoking the adorable name of Jesus.

The persecution of Diocletian was raging, and Theotecnus, a most cruel man, was governor of the province of Dalmatia. He commanded that all the churches should be demolished, and that all who were known to be followers of Jesus Christ should be slaughtered. The pagans, animated by the cruelty of the governor, entered the houses of the Christians, and plundered whatever they thought fit; and if anyone dared to complain, he was accused of being a rebel. Every day Christians were put into prison, and even noble ladies barbarously dragged through the streets; so that many hid themselves in caves, or flew to the woods, living, like the beasts, upon wild herbs.

St Theodotus remained in Ancyra, where he employed himself in assisting those who had been imprisoned for the faith, helping those in need, and burying the bodies of the martyrs. Moreover, as the governor had forbidden bread or wine to be sold to anyone who was not known as an idolater, St Theodotus supported the poor, and supplied the priests with bread and wine for the celebration of the Mass. Thus, by the charity of Theodotus, his inn became the temple of asylum of the Christians.

Having been informed that a certain friend of his, named Victor, had been imprisoned for the faith, he went by night to see him, and encouraged him, saying:

“A Christian should have no other concern than firmly to maintain his faith.”

Having learned that most enticing promises had been made to him in case he would renounce his faith, St Theodotus said:

“Believe me, my dear Victor, the promises which the impious make to us are for our perdition; they are intended to make us slumber in order that we may not see the eternal death to which they lead us.”

Victor, animated by this exhortation, went boldly to the place of torture; but having suffered for some time, demanded a respite to consider the proposals made to him. He was accordingly brought back to prison, where he soon died of his wounds, leaving his eternal salvation in great doubt, to the inexpressible grief of St Theodotus.

Some time after this sad occurrence our saint met a priest, named Fronto, in a country place called Malus, and told him that he thought it a most appropriate spot for placing the relics of the martyrs. The priest replied that the relics should be procured before the work would be undertaken. Theodotus said:

“God will take care of that. Let it by thy concern to build the crypt, and the relics shall not be wanting.”

As an earnest of this promise, he gave the priest a ring from his finger, and returned to Ancyra.

Here he learned that the bodies of seven martyred virgins had been cast into a pond, and was miraculously assisted in releasing them; for there arose a strong wind that drove the waters to the sides of the pond, and discovered at the bottom the bodies of the saints, which he drew out and placed in a neighboring oratory.

Information to this effect having been lodged against him, he voluntarily surrendered himself to the magistrates. On entering the court the governor, St Theotecnus, told him that if he sacrifieced to the gods he would be made high-priest of Apollo, and be loaded with riches and honors. Theodotus, despising all, undertook to prove to the governor the greatness and sanctity of Jesus Christ, and the enormity of the vices which the pagans themselves attributed to their false gods. But Theotecnus, angered by this discourse, ordered that he should be stretched upon the rack, and that, one after another, the executioners should tear his flesh with iron hooks; after which vinegar was poured into his wounds, and lighted torches applied to his sides.

When the saint smelt the burning of his flesh he turned his head somewhat aside, which the governor mistaking for a sign that he was yielding to the torments, approached him and said:

“Where now, Theodotus, is that daring thou didst so lately glory in? Hadst thou respected the emperor, thou wouldst not now be reduced to this piteous state. Vile innkeeper! Thou shalt learn not to contend henceforward with emperors who have power over thy life.”

St Theodotus calmly replied, “If thou hadst arrested me for any crime, then I should fear. As it is, I fear nothing. Invent new torments, and my Lord Jesus Christ, for whose love I suffer, will grant me strength to disregard them.”

The governor enraged at these words, caused his jaws to be struck with a stone so as to beat out his teeth, unpon which the saint said:

“Although thou shouldst cut out my tongue my prayers cannot be interrupted, for God hears the Christians even when they are deprived of their speech.”

The governor having ordered him back to prison he showed his wounds to the crowd as he went along, giving them thereby to understand the strength which Jesus Christ imparts to his servants.

“It is only reasonable,” he said, “to suffer thus for Our Lord, who has suffered so much for us.”

At the end of five days, the governor, seated upon a throne in one of the public squares, ordered the martyr to be again brought before him. He then commanded that his wounds should be reopened, his sides again torn with irons, and that in this state he should be stretched upon red-hot tiles. The saint, says Cardinal Orsi, feeling a most excruciating pain, penetrating to his very bowels, prayed that the Lord would somewhat mitigate his suffering; and having obtained additional consolation, continued to endure this horrible torture with admirable fortitude.

The tyrant had him stretched upon the rack a third time, and caused him to be lacerated as before; but ultimately despairing of being able to overcome his constancy, condemned him to lose his head, and ordered that his body should be burned. Arrived at the place of execution, the saint gave God thanks for the grace which had enabled him to overcome his torments, and fervently implored peace for the Church. Then turning to the Christians, who had followed him with many tears, he consoled them, and desired that they should give God thanks for his victory, assuring them that he would not fail to assist them by his prayers in heaven. He then presented his neck to the executioner, and received the crown. His body was placed upon a funeral pile to be burned, but appeared surrounded with a light so supernaturally resplendent that no one dared approach it. It was therefore left guarded by soldiers.

Upon that same day the priest Fronto arrived in Ancyra with the ring which Theodotus had given him, as an earnest that God would supply relics for the place previously prepared at Malus. He had with him an ass laden with excellent wine, and the animal upon reaching the place where the martyr’s body was being watched instantly lay down. It was night; the soldiers, who had retired to eat their supper in a little hut, invited the priest to join them, and Fronto gladly complied, giving them in return some wine. The guard, having drunk freely, fell into a sound sleep, while Fronto, adoring the wondrous ways of divine Providence, took the body of Theodotus, and, replacing his ring, laid it upon the ass. The animal being let loose, went back to Malus, where a church was subsequently built in honor of St Theodotus. His martyrdom took place in the beginning of the persecution under Diocletian, in the year 303.

Cardinal Orsi says that his acts were written by one Nilus, is most intimate friend, and an eye-witness of the facts herein recorded.