Prayer to St Michael the Archangel

Most glorious prince of the heavenly hosts, Archangel St Michael, defend us in the battle and in the tremendous struggle we carry on against the Principalities and Powers, against the rulers of the world of darkness and all evil spirits. Come to the help of man, whom God created immortal, fashioned to His own image and likeness, and rescued at a great price from the tyranny of the devil. With the great army of the holy angels fight today the battle of the Lord as thou didst of old fight against Lucifer, the leader of the proud, and his apostate angels, who were powerless against thee, and they had no longer a place in Heaven; and that monster, the old serpent who is called the devil and Satan, that seduces the whole world, was cast into hell with his angels. 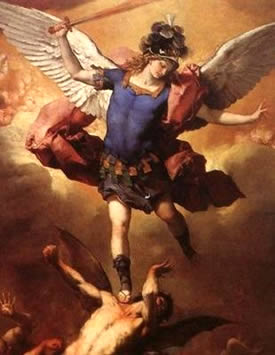 But now that first enemy and homicide has regained his insolent boldness. Taking on the appearance of an angel of light, he has invaded the earth, and with his whole train of evil spirits he is prowling about among men, striving to blot out the name of God and of His Christ, to capture, to destroy, to drag to eternal perdition the souls destined to the crown of eternal glory. That malignant dragon is pouring abroad, like a foul stream, into the souls of men of ruined intellect and corrupt heart the poison of his wickedness, the spirit of lying, of impiety and blasphemy, the pestilent breath of impurity and of all vice and iniquity. Most cunning enemies have filled with bitterness and drenched with gall the Church, the Spouse of the Lamb without spot, and have lifted impious hands against all that is most sacred in it. Even in the holy place where the See of Blessed peter and the chair of truth was set up to enlighten the world, they have raised the abominable throne of their impiety with the iniquitous hope that the Shepherd may be stricken and the flock scattered abroad.

Arise, then, unconquerable Prince, defend the people of God against the assaults of the reprobate spirits, and give them the victory. Holy Church reveres thee as its guardian and patron; it glories in thee as its defender against the malignant powers of hell; to thee God has committed the souls that are to be conveyed to the seats of the Blessed in eternal happiness. Pray, then, to the God of peace, that He may put Satan under our feet, so completely vanquished that he may no longer be able to hold men in bondage and work harm to the Church. Offer up our prayers before the Most High, so that the mercies of the Lord may prevent us, and lay hold of the dragon, the old serpent, who is the devil and Satan, and hurl him bound in chains into the abyss where he may no longer seduce the souls of men. Amen.

R. The Lion of the tribe of Juda, the Root of David, has conquered.

V. May Thy mercies, O Lord, be fulfilled in us.

R. As we have hoped in Thee.

R. And let my cry come unto Thee.

O God, and the Father of Our Lord Jesus Christ, we call upon Thy holy name and humbly beseech Thy clemency, that, through the intercession of the ever-immaculate Virgin and our Mother Mary, and of the glorious Archangel Saint Michael, thou wouldst vouchsafe to help us against Satan and all the other unclean spirits that are prowling about the world to the great peril of the human race and the loss of souls. Amen.