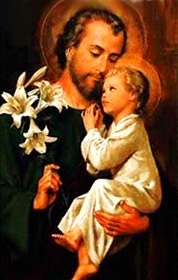 “All the unmarried men gathered in the temple and prayed to the Lord conjointly with the priests, in order to be governed by the Holy Spirit in what they were about to do. The Most High spoke to the heart of the high priest, inspiring him to place into the hands of each one of the young men a dry stick, with the command that each ask his Majesty with a lively faith, to single out the one whom He had chosen as the spouse of Mary.”

“And as the sweet odor of her virtue and nobility, the fame of her beauty, her possessions and her modesty, and her position as being the firstborn in her family was known to all of them, each one coveted the happiness of meriting her as a spouse. Among them all only the humble and most upright Joseph thought himself unworthy of such a great blessing; and remembering the vow of chastity which he had made and resolving anew its perpetual observance, he resigned himself to God’s will, leaving it all to His disposal and being filled at the same time with a veneration and esteem greater than that of any of the others for the most noble maiden Mary.”

“While they were thus engaged in prayer the staff which Joseph held was seen to blossom and at the same time a dove of purest white and resplendent with admirable light, was seen to descend and rest upon the head of the saint, while in the interior of his heart God spoke:

“Joseph, my servant, Mary shall be thy Spouse; accept Her with attentive reverence, for She is acceptable in my eyes, just and most pure in soul and body, and thou shalt do all that She shall say to Thee.”

“At this manifestation and token from heaven the priests declared Saint Joseph as the spouse selected by God himself for the maiden Mary. Calling Her forth for her espousal, the Chosen one issued forth like the sun, more resplendent than the moon, and She entered into the presence of all with a countenance more beautiful than that of an angel, incomparable in the charm of her beauty, nobility and grace; and the priests espoused Her to the most chaste and holy of man, Saint Joseph.”

*from The City of God by Ven. Mary of Agreda, roman-catholic-saints.com, Marian Calendar