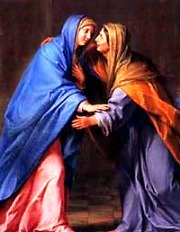 August 27: The seven joys of Mary

The first of the seven joys of Mary was the Annunciation, which the Franciscans express in these words: “The Immaculate Virgin Mary joyfully conceived Jesus by the Holy Ghost.” Read the account, clear, brief, and uplifting, in the first chapter of Saint Luke, how the Angel Gabriel came from God and told the Virgin Mary that she was to be the Mother of God. Imagine the joy in the heart of Mary to learn from the messenger of the Almighty that she, who was willing to be but a handmaid or servant in the household of the Lord, that she was to be really the Mother of God. What joy and happiness at the greeting of the angel. What joy to know that now within her womb she carried the Son of God.

The second great joy of Mary was the Visitation. “The Immaculate Virgin Mary joyfully carried Jesus visiting Elizabeth.” Charity and love inspired this visit. How happily our Blessed Mother must have made her way over the hills to the distant home of her cousin Elizabeth, who also was with child, the future John the Baptist. Womanlike, Mary wanted to tell her cousin and share in the joys of an expectant mother. What an inspiration and joyful example to all the mothers in the world.

The third of the seven joys of Mary life was the nativity. “The Immaculate Virgin Mary joyfully brought Jesus into the world.” Everyone who has ever experienced the bliss of Christmas has had just a faint echo of Mary’s joy when she gave birth to Christ. Every mother shares that joy. Mary experienced it in all her innocence and sweetness. She experienced the holy happiness of bringing into the world the Son of God, who was to be the Redeemer and Savior of all men.

The fourth joy of Mary was that of the Epiphany, which we might express in these words: “The Immaculate Virgin Mary joyfully exhibited Jesus to the adoration of the Magi.” Every mother is happy when she can show her child to others. Every mother is joyful when friends or acquaintances or even chance visitors comment about her child, praise it, and even bring it gifts. That was the happy experience of Mary when the three Wise Men came thousands of miles to adore and honor her Child, to bring gifts to her Boy.

The fifth of the seven joys of Mary, our Blessed Mother, is what she experienced when she finally found Jesus after His three-day loss in the temple. “The Immaculate Virgin Mary joyfully found Jesus in the temple.” To have her child with her is a mother’s joy. But to find a child that is lost is a greater joy because of the contrast to the sorrow of separation. Mary experienced such a bliss when she found Christ in the temple teaching and listening to the doctors, the learned professors of the law.

The sixth great joy of the Blessed Mother was the one she experienced upon seeing Jesus after His resurrection. “The Immaculate Virgin Mary joyfully beheld Jesus after His resurrection.” Words fail in expressing the happiness of the Mother of God when she saw her Son risen from the grave, saw Him in the full beauty of manhood, saw the Boy whom she had brought into the world, had reared and trained and taken care of for so many years. Her joy, by way of contrast with the grief of the first Good Friday, was supreme.

The seventh of the seven joys of Mary, and the crowing joy, was that Mary had when she was taken up into heaven and crowned Queen of heaven and earth. “The Immaculate Virgin Mary was joyfully received by Jesus into heaven and there crowned Queen of heaven and earth.” No human pen, no human brush can picture or express the joy in Mary’s heart when she was finally reunited with her Son in the bliss of the beatific vision. Neither can we express in words the happiness in her heart when she was crowned, rewarded by her Divine Son who made her the Queen of this world and of the heavenly court.

The feast of the Seven Joys of Mary originated within the Franciscan Order. It possesses the privileges of a feast of the second class, and is celebrated by all the members of the Three Orders of St. Francis.

The feast originated during the first part of the 20th century, as a commemoration of special Franciscan devotion to the Rosary of the Seven Joys. The Rosary, according to legend, dates back to the year 1422. The story is told that a certain young man had been admitted into the Order in that year, and that prior to his reception he had been accustomed to place a wreath of flowers on the statue of the Blessed Virgin as a mark of his filial love and devotion. As a novice he was unable to continue this practice, and became exceedingly discouraged.

The Blessed Mother appeared to him and gave him consolation. "Do not be sad and cast down, my son," she said sweetly, "because you are no longer able to place a wreath of flowers on my statue." She then taught him how to weave a crown from the flowers of his prayers and assured him they would always remain fresh and beautiful.

"Recite one Our Father and ten Hail Marys in honor of the joy I experienced when the angel announced to me the Incarnation of the Son of God." Our Lady added each of the other mysteries. The novice was assured this was the best manner of obtaining innumerable graces for himself, and immediately began the recitation of the prayers in honor of the Seven Joys. The novice master chanced to pass by, saw an angel weaving a marvelous wreath of roses, and after each tenth rose inserting a lily. When the wreath was complete, the Blessed Virgin herself placed it on the youth's head.

*from Feasts of Our Lady, by Msgr. Arthur Tonne and Marys Book