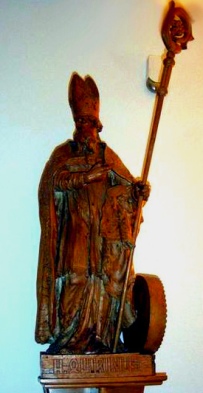 The Emperors Diocletian and Maximian, having abdicated the empire in the year 303, their successor, Galerius, continued the persecution against the Christians. St Quirinus, who was bishop of Siscia, in Croatia, after having converted the inhabitants of that country to the faith of Christ, understanding that Maximus, who ruled in Pannonia as lieutenant for the governor, had given orders for his arrest, escaped from the city, in order that he might be spared for the benefit of his flock.

He was overtaken, however, by the soldiers, and presented before Maximus, who asked him why had had fled; the saint replied, “I obey the orders of my Master, who hath said, ‘When they persecute ye in one city, fly ye into another.’”

“Who hath given this order?” Maximus demanded.

“But knowest thou not that the emperor can find thee in all places,” Maximus asked coyly, “and that thy God cannot save thee from our hands?”

“I know this,” Saint Quirinus answered, “that our God is with us, and can succor us in all places. He it is that grants me strength in this my decrepit age, and will also uphold me during thy tortures.”

“Thou speakest much because thou art an old man,” Maximus taunted, “and hopest to baffle us with talk. We require thy submission, not thy exhortations. There shall be no further toleration for Christians in the empire. The emperor has ordered that all shall sacrifice to the gods on pain of death. Obey, therefore.”

“I cannot obey orders that are contrary to my religion. How can I refuse to obey God, in order to please men?”

“Dotard!” Maximus shouted. “Hadst thou not lived so long, thou wouldst not have learned such idle talk – obey the emperor, and learn to be wise, even at the close of thy days.”

“Dost thou then think it wisdom to commit such an act of impiety?”

“No more words,” Maximus bellowed. “Choose to be a priest of Jupiter, or to die amid torments.”

“I have already made my choice,” Saint Quirinus answered calmly, “and I now exercise the functions of a priest, in offering myself as a sacrifice to my God, and esteem myself happy in being, at the same time, the priest and the victim.”

Maxumus, unwilling to hear him any longer, caused Quirinus to be cruelly scourged. The holy bishop, during the infliction, raised his eyes to heaven, and returned thanks to God. Then, turning towards Maximus, he said that he was willing to suffer still greater torments, in order to give a good example to his followers; but the lieutenant, fearing that he might expire under the lash, sent him back to prison.

St Quirinus, upon his arrival, again thanked God for what he had suffered, and prayed that those who were in prison might be illuminated by the light of the true faith. About midnight the martyr was seen surrounded by a great light, whereupon the jailer, named Marcellus, casting himself at the feet of the saint, exclaimed, “Servant of God, pray to him for me, since I believe that there is no other God than he whom thou adorest.”

Saint Quirinus, having instructed him in the faith, as well as the time would permit, baptized him.

At the expiration of three days Quirinus was sent, loaded with chains, to Amantius, the governor of the greater Pannonia, which is now called Hungary. On his way thither he was confined at Sabadia, where he was visited by some Christian women, who brought him food. While the saint was blessing his meal, the chains fell from his hands and feet, as the Lord wished to show, by this sign, his approval of the charity done to the venerable relate.

Upon his arrival the governor had Quirinus brought before him, and, having read the proceedings of his former trial, endeavored to shake his resolution by threatening to put him to a most cruel death, notwithstanding his most advanced age. The saint replied that the recollection of his old age should the more induce him to despise death, as he had but a short time to live; and Amantius, despairing of being able to change him, ordered him to be cast into the river Sabarius, with a mill-stone tied to his neck.

While the saint was being led to the bridge, a great concourse of people had assembled. They saw him cast into the river, together with the mill-stone, but both were seen to float upon the surface of the water; whence the holy bishop commenced to exhort the faithful to remain firm in the faith, and, as he continued to preach thus for a considerable time, many pagans were converted.

At last the saint made the following prayer. “Christ Jesus, my Savior, these people have already seen the wonders of Thy power. Grant me now the grace to die for Thee, nor permit me to lose the crown of martyrdom.”

The body of Saint Quirinus then sank, together with the stone, and he thus rendered his soul to God on the 4th of June, in the beginning of the fourth century. His death is placed by Saint Jerome in the year 310, and by Baronius 308.

The body of Saint Quirinus was afterwards translated to Rome, and buried near the catacombs of St Sebastian; but Pope Innocent II finally deposited it in the church of Saint Mary beyond the Tiber.