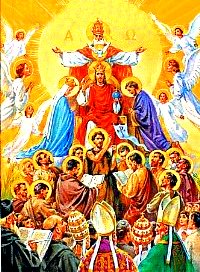 It is believed that Saint Irenaeus was born in the city of which he was afterwards bishop; and, although it is probable that his parents were pagans, he professed the faith of Jesus Christ from his childhood. He married at an early age and had many young children he left behind at the time of his martyrdom. This saint gave such extraordinary examples of virtue that he deserved to be made Bishop of Sirmium while yet a young man; and from the time he received that charge, he ceased not to combat the enemies of the faith, and to defend his flock from their artifices, until he terminated a brilliant career in the glory of martyrdom.

The edicts of the Emperor Diocletian against the Christians were published in Sirmium in the year 304, and Probus, the governor of Lower Pannonia, was most indefatigable in putting them into execution. The ecclesiastics, and particularly the bishops, were the first objects of his unholy zeal; for he thought that by striking the pastors he could the more easily disperse the flock of Jesus Christ.

Irenaeus was accordingly arrested, and brought before Probus, who said to him: “Obey the imperial edicts, and sacrifice to the gods.”

Saint Irenaeus replied, “The Scripture saith that whosoever sacrifices to false gods shall be exterminated.”

“The princes have commanded that all Christians shall sacrifice to the gods,” Probus stated flatly, “or they shall be tortured.”

“But I have been commanded to suffer all tortures rather than deny my God and sacrifice to demons,” Saint Irenaeus explained.

“Either sacrifice,” Probus threatened, “or I will put thee to the torture.”

“In doing so,” Irenaeus boldly answered, “thou shalt please me; for thus shall I be made a participator of the Passion of my Savior.”

Hereupon the governor commanded that he should be tortured; and, seeing that he suffered much, said, “What dost thou now say, Irenaeus? Wilt thou now sacrifice?”

The saint replied, “I sacrifice, by my confession, to my God, to whom I have always sacrificed.”

During the torments of Saint Irenaeus, his father, his wife and children, his domestics and friends, came to implore of him to obey the emperors. His children embraced his feet, crying out: “Father, if thou hast no pity for thyself, have pity, at least, on us.” The wife, with many tears, besought him not to leave her disconsolate; while his friends exhorted him not to throw away his life in his youth. But the saint, like an immovable rock upon which the waves lose their strength, armed himself against their assaults with the words of the Savior – “He that shall deny me before men, I will also deny him before my Father who is in heaven.”

To their importunities he returned not a single word of reply, but sighed only for the consummation of his martyrdom.

Probus then said to him, “Irenaeus, abandon this thy folly; sacrifice to the gods, and destroy not thyself in the prime of life.”

The saint answered, “It is that I may not destroy myself for all eternity that I refuse to sacrifice.” He was then taken down and sent to prison, where he had to endure various tortures for several days.

After some time, Probus, seated upon his tribunal, ordered that the holy bishop should be again brought before him, and, upon his appearance said, “Irenaeus, now at length sacrifice, and free theyself from the torments which otherwise await thee.”

The saint replied, “Do that which thou art commanded to do, and do not at all imagine that I am likely to obey thee.”

Probus, enraged at this answer, caused Saint Irenaeus to be scourged in his presence, during which infliction the saint said, “From my childhood I have adored the one only God, who has always assisted and comforted me, and I cannot adore gods made by the hands of men.”

“I do free myself from death,” Irenaeus answered, “when, by the pains which I suffer, I gain eternal life.”

The governor then asked whether he had a wife, children, or parents alive, but Irenaeus answered that he had not, adding, “I say I have not, because Jesus Christ hath declared that whosoever loveth father or mother, wife or children, more than Him, is not worthy of Him.”

“Sacrifice at least for thy children’s sake,” Probus said.

“My children have God to provide for them.”

“Do not oblige me to put thee again to the torture.”

“Do thy pleasure,” Irenaeus said, “but thou shalt see what constancy my Lord Jesus Christ will give me to overcome all thy arts.”

Probus then ordered Irenaeus to be cast into the river, but the saint, hearing the sentence, exclaimed, “I thought, that, after so many threats, thou wouldst have caused me to suffer many tortures, and to be cut to pieces; I beseech thee to do so, that thou mayest perceive how Christians, who have faith in God, despise death.”

Probus, enraged at these words, ordered that the saint should be beheaded, and then cast into the river. The holy bishop, perceiving that his end was approaching, returned thanks to Jesus Christ for having given him the necessary fortitude, and for calling him, by such a death, to the participation of His glory. When he arrived at the bridge of Diana, which was the place selected for the execution, he threw off his garments and prayed thus: “O Lord Jesus Christ! Who didst vouchsafe to die for the salvation of the world, I beseech Thee that Thy angels may receive my soul; since I most willingly suffer death for the honor of Thy name, and the edification of Thy Church. Receive me into Thy glory for Thy mercy’s sake, and strengthen my flock in Thy holy faith.”

The head of Saint Irenaeus was then struck off, and his body thrown into the river Save.